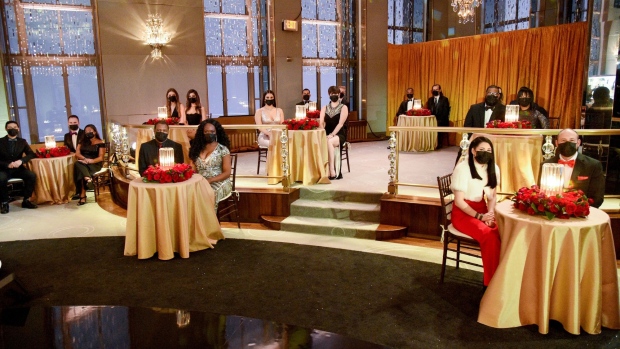 Frontline and essential workers attend as guests during the 78th Annual Golden Globe Awards on Feb. 28. , Getty Images via Bloomberg

Netflix Inc. and Walt Disney Co. emerged as the big winners at the Golden Globe awards, taking home most of the evening’s prizes for their films and television shows, in an awards show tailor-made for the unusual pandemic-affected times.

Disney grabbed the top award, best dramatic motion picture, for “Nomadland,” while the film’s director Chloe Zhao became the second-ever woman to take home that prize. Netflix especially dominated in television, with “The Crown” and “The Queen’s Gambit,” grabbing a handful of awards at the ceremony. In all, the two studios won 15 of the prizes handed out Sunday by the Hollywood Foreign Press Association in a NBC broadcast hosted by comic actors Tina Fey and Amy Poehler.

The dominance of the top global streaming service and the top traditional studio won’t surprise many. For the past year, many theaters have been closed, and the biggest new films have been delayed or put online. That also meant studios had to hold back at least some of their multimillion-dollar marketing budgets, making it harder to suss out clear favorites. Instead, online viewing was on the rise, with even Disney leaning hard into the change, expanding its Disney+ streaming service and debuting top films over the internet.

Other streaming services, particularly Amazon.com Inc., also picked up key prizes. “Borat Subsequent Moviefilm” won best picture, musical or comedy, and its star Sacha Baron Cohen won the Golden Globe for his performance. Other winners included Daniel Kaluuya, who was named best supporting actor in a motion picture for his role in “Judas and the Black Messiah,” a Warner Bros. film about the FBI’s infiltration of the Black Panthers. John Boyega was voted best supporting actor in a TV role for his part in “Small Axe,” an Amazon show about London’s West Indian community, and “Schitt’s Creek” captured the award for best TV comedy.

Because of COVID-19, the 78th Golden Globes were held with presenters and winners appearing remotely, unlike past years, when the awards were handed out in a banquet room at the Beverly Hilton hotel before a TV audience of millions. They’re also usually held in January, when many awards contenders are still playing in theaters.

An opening monologue from comedians Fey and Poehler highlighted the oddity. Rather than sharing the stage at the Hilton, they spoke from separate stages there and at the Rainbow Room in New York.

“Normally this room is full of celebrities, but tonight our audience on both coasts is made of smoking-hot first responders,” Fey said. “We are so grateful for the work that you do, and that you’re here, so that the celebrities can stay safely at home.”

The picture has been much brighter for TV, which the Globes also celebrate. Millions of people stuck at home in the U.S. and abroad over the past year swarmed to streaming services like Netflix and Disney+, which now count hundreds of millions of subscribers globally.

With film nominees like “Mank” and popular series like “The Crown,” Netflix led the nominations with 42. Disney was second with 20, including a best-picture nod for the movie “Nomadland” and its star Frances McDormand.

The year’s awards also come against the backdrop of controversy surrounding the Hollywood Foreign Press Association, the group of journalists that chooses the nominees and winners.

A lawsuit filed by a Norwegian journalist who was denied membership accused the organization of corruption, laid out in a series of exposes by the Los Angeles Times. The suit was dismissed, but several members told the newspaper awards can effectively be “bought” with expensive press junkets, among other inappropriate behavior.

The group has also been criticized for failing to have a Black member for at least 20 years and for overlooking some of the buzziest Black-led pictures this year with their film-drama nominations. “Ma Rainey’s Black Bottom” and “Da 5 Bloods” are expected to be nominated for best picture at this year’s Academy Awards, according to the website Gold Derby. The Oscar nominations come out on March 15.

The HFPA told the newspaper that none of the allegations had been proven in court, and they reflected “unconscious bias” against its “diverse membership.”

Even with pandemic, the Golden Globes remain a big marketing showcase. Last year’s telecast drew a U.S. TV audience of 18.3 million viewers, putting it among the most-watched nonsports shows of the year. The Oscars, the movie industry’s most-prestigious awards, drew an audience of 24.3 million.