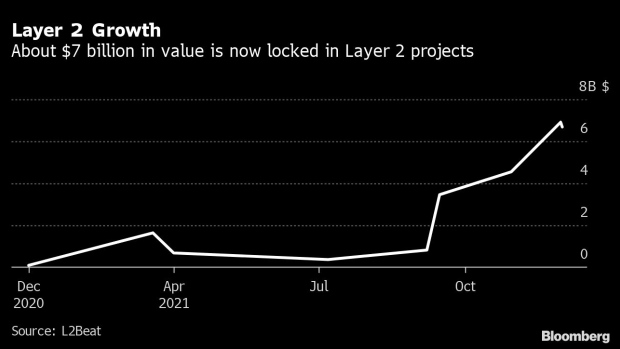 (Bloomberg) -- New technology promising to solve Ethereum’s growing pains is gaining traction, increasing bets that some day most of the network’s transactions might not actually take place on its own blockchain.

For years slow speeds and high transaction fees have plagued the network underpinning the $550 billion cryptocurrency Ether -- home to the most popular blockchain applications. Its weaknesses have allowed new competitors such as Solana and Avalanche to gain ground. However, help from so-called Layer 2 technologies, or rollups, could be a solution.

Digital ledgers like Ethereum are designed to slow down and become more expensive as their popularity increases. But these Layer 2 projects, many of which have only recently debuted, can effectively take transaction data off Ethereum, compress it and post it back onto the original chain for a fraction of the time and cost. So far the the user base is relatively small. But rapid growth is raising expectations that Ethereum will not only be able to ward off competition but that other blockchains might adopt similar scaling solutions.

If the technology takes off, networks like Ethereum might only be directly used for very large transactions in the future, with the bulk of activity happening on Layer 2 networks.

“That’s where we’re headed with Ethereum,” said Jeff Dorman, chief investment officer at Arca, a digital asset investment manager. “It’s a good problem to have. It’s that old Yogi Berra saying ‘nobody goes to that restaurant anymore because it’s too crowded’ -- of course it’s too crowded because everyone is going there! It will take some time to scale correctly, but it will absolutely be solved because there is demand for it.”

Layer 2 solutions including Arbitrum, Loopring, Optimism and StarkWare are leading the shift, thanks in part to their embrace by cryptocurrency exchanges. Rollups can provide a major competitive advantage by making it significantly cheaper to trade Ether and other Ethereum-based coins. A transaction that might cost traders $50 and take 14 seconds to confirm directly on Ethereum could cost less than a cent and happen instantaneously, depending on the program.

Decentralized exchange dYdX moved to Layer 2 in April and its daily trading volume reached that of Coinbase Global Inc. for a day this fall as traders, in part, liked its lower fees. Additionally Binance, the world’s biggest crypto exchange, integrated with Arbitrum in November and Coinbase is working on Layer 2 integrations as well.

“They are at the core of Ethereum’s future,” Tim Beiko, a computer scientist who coordinates Ethereum developers, said about Layer 2.

About $7 billion of value is locked on Layer 2 chains, up from just $48 million at the beginning of the year, according to tracker L2Beat. However, there have been barriers to adoption. It can take a week to move funds from Arbitrum’s network onto Ethereum without additional technology called bridges. Transaction fees can still be too high for many applications. And not enough of the popular Ethereum applications use rollups yet.

“If I can use Layer 2 I prefer to use it, because I don’t want to pay all the fees,” said David Mihal, who runs some sites aggregating Layer 2 statistics. “But of course the problem with any new chain is getting these network effects. I still use Ethereum Layer 1 more than I use Layer 2, because a lot of the fun apps are still there.”

However, further development could encourage greater adoption. Ethereum is currently considering a proposal from it cofounder Vitalik Buterin that could cut Layer 2 transaction costs fivefold. More rollups are issuing tokens, offering supporters extra incentives. Funding is being thrown around. And existing companies are redoubling efforts. Polygon -- whose token has a $14 billion market cap -- is working to expand its capabilities, and StarkWare is rolling out a way to further scale and reduce costs in the coming months.

“Today Ethereum could be viewed as Manhattan in the middle of the 17th century,” said StarkWare CEO Uri Kolodny. “Farms and manufacturers are all producing there. What we are doing is we are the skyscraper technology that uses the same footprint and now serves many, many more people. We think this can be built to any height that’s needed.”