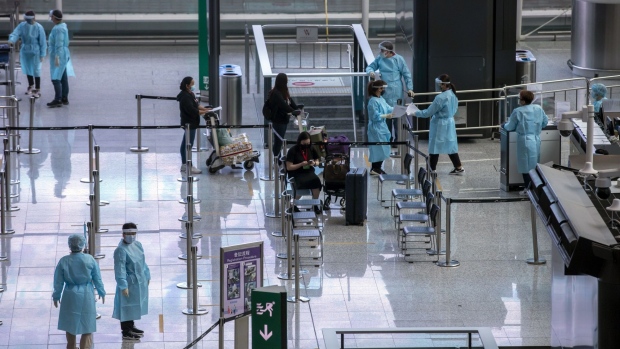 Travelers heading to quarantine in the arrival hall at Hong Kong International Airport in Hong Kong, China, on Friday, April 1, 2022. A ban on flights from nine countries including the U.S. and U.K. is lifted from today and the amount of time travelers spend in mandatory hotel quarantine will be cut in half, provided they test negative, Hong Kong's Chief Executive Carrie Lam said on March 21, unveiling the results of a review of the city's approach to the pandemic. , Bloomberg

(Bloomberg) -- Hong Kong’s incoming health secretary said he aims to reduce quarantine to five days, but said the city would stick to its “dynamic zero” approach to eliminating the virus.

Lo Chung-mau told local media outlet Commercial Radio that the city’s Covid-19’s death toll required that it maintain tough rules, but declined to give a timeline on plans to open up Hong Kong’s border with mainland China, according to the report.

The financial hub’s compulsory quarantine regime has been a source of consternation between business groups and the government, which needs to hew to Beijing’s zero-tolerance approach despite the fallout. Hong Kong has eased travel policy somewhat over the past few months, with hotel quarantine for incoming travelers cut to seven days and a ban on non-residents entering the city lifted, provided they are fully vaccinated. But the regime is still much stricter than the rest of the world, which has dismantled pandemic curbs and is largely treating the virus as endemic.

Lo’s comments add to signs the new government, which comes in on July 1, may prioritize loosening border curbs, with incoming chief executive, John Lee, telling the South China Morning Post that he plans to “quickly review” the quarantine measures.

Lee, who will succeed current leader Carrie Lam, said that he would seek to reduce inconveniences for international travelers “without bringing extra risk to the mainland at the same time.” He said he also plans to prioritize the full reopening of the China border, without saying how he could accomplish both goals.

A Macau-born surgeon, Lo has taken a tough stance on Covid in the past, saying in February that China’s Covid Zero strategy needed to be maintained because living with the virus would “get us all killed.” At the time, he said the US and Europe were only easing restrictions because they failed to control Covid-19.

Read a profile of the incoming health secretary here.

He replaces Sophia Chan, a public health official who had consulted for the World Health Organization and worked in the Food and Health Bureau since at least 2012.