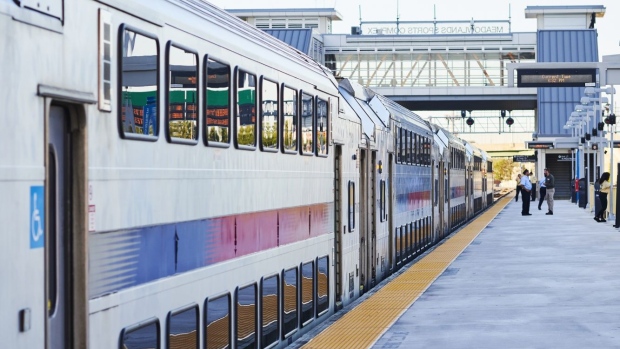 A New Jersey Transit train arrives at the Meadowlands stop in East Rutherford, New Jersey, U.S., on Thursday, Aug. 29, 2019. After 16 years of false starts, the behemoth American Dream retail and amusement complex is set to open just west of Manhattan. To get there, an expected 40 million visitors must join the traffic-choked roads of northern New Jersey. Photographer: Gabby Jones/Bloomberg , Bloomberg

(Bloomberg) -- Governor Phil Murphy is seeking to balance New Jersey’s spending for the remainder of this fiscal year in part by pushing off payments to schools, pensions, transit and towns into the next budget period.

Facing billions in lost revenue from the coronavirus lockdown, state Treasurer Elizabeth Muoio released long-awaited plans for $5 billion in “deep cuts and spending deferrals.” The proposal calls for $2.1 billion of cuts to spending, including property-tax benefits, college operating aid and assistance to schools.

Murphy seeks to save another $3.2 billion in part by disbursing payments in October that otherwise would be due in September -- the last month of an extended fiscal year. New Jersey was the only state to alter its fiscal year amid uncertainty over the coronavirus’s impact on revenue and spending. Its fiscal 2020 will end in September, rather than June, and its fiscal 2021 will be nine months instead of 12.

Had the state stuck to the normal fiscal year, lawmakers and the administration would have had to evaluate the numbers immediately and make adjustments far sooner, Senate President Stephen Sweeney said in a May 20 interview. By now, New Jersey would have had a “much clearer picture” of its finances, he said.

A $951 million pension payment, due in September, will be paid the next month, according to a revised spending plan. Other September-to-October deferrals include $467 million for school aid; $354 million for municipal property-tax relief; $250 million for special education and $28 million in budget aid to distressed cities.

New Jersey is the second-hardest-hit state after New York, with almost 153,000 Covid-19 cases. In March, Murphy closed nonessential businesses and ordered social distancing -- a necessary step, he says, that sent state revenue “off the fiscal cliff.” He has faced increasing pressure in recent days to end the lockdown.

The governor expects revenue to fall short by $2.7 billion, or 7%, this fiscal year. For 2021, his proposed $40.9 billion budget is projected to be short by $7.2 billion, or 18%. His administration will give a revised plan for next fiscal year in August.

The Murphy administration had made “great strides” over the past two years to improve New Jersey’s fiscal condition, building the surplus and and making record pension payments, said Muoio, the treasurer. The pandemic “halted this progress in its tracks,” she said.

The state constitution bans borrowing to plug budget holes, and federal grants are far from certain. Without the assistance, Murphy has said, the state will have to cut public employees, including teachers and police, firefighters and health workers who have been crucial to combating the new coronavirus.