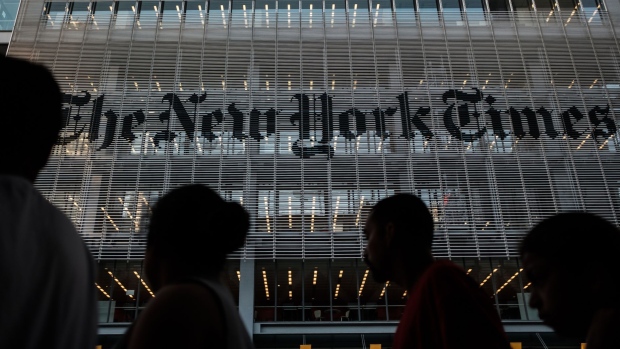 New York Times Co.’s digital revenue exceeded that from print for the first time last quarter, a milestone for the 169-year-old newspaper.

The Times added 669,000 new digital subscribers, including 493,000 to the core news product, it said in a statement Wednesday. That brought paid digital-only subscriptions to 5.7 million, with print customers raising the total to 6.5 million.

Still, total revenue dropped 7.5 per cent after advertising sales fell off a cliff, declining 44 per cent, as marketers pull back spending during the COVID-19 pandemic.

The Times sees little improvement in ad sales next quarter. The company expects total advertising revenue to decline 35 per cent to 40 per cent, largely due to the continuing impact of the pandemic.

While the company’s digital subscriber growth is accelerating, many of those subscribers are starting out on discounted rates. The company expects total subscription revenue next quarter to increase only about 10 per cent.

The earnings report was for the final full quarter with Chief Executive Officer Mark Thompson at the helm. The Times last month named Chief Operating Officer Meredith Kopit Levien as the next CEO, effective Sept. 8.

Kopit Levien was instrumental in many of the Times’ digital initiatives in recent years, among them an expansion in podcasting. That took a further step last month with the company’s acquisition of Serial Productions, the outfit behind the pioneering “Serial” podcast.

Times shares fell as much as 2.8 per cent to US$45.48 in New York trading Wednesday. The stock had risen 45 per cent this year through Tuesday, far outpacing the 2.3 per cent gain of the S&P 500 index.