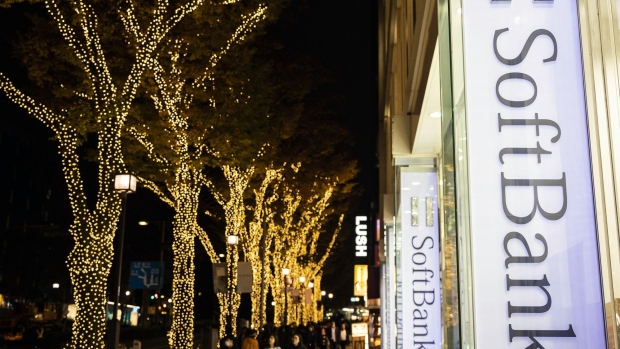 Signage for SoftBank Group Corp. is displayed outside a store in Tokyo, Japan, on Thursday, Nov. 29, 2018. SoftBank's 2.4 trillion yen ($21 billion) initial public offering of its Japanese telecommunications unit has successfully secured sales for the bulk of its shares to individual investors, people familiar with the matter said. Photographer: Keith Bedford/Bloomberg , Bloomberg

A 29-year-old South Korean entrepreneur has snagged funding from SoftBank Group Corp.’s venture arm and Kakao Page Corp. to realize his ambition of creating the go-to app for online fiction.

His firm, New York-based Radish, raised US$63.2 million in a first round of financing from investors including the Japanese conglomerate and Korean social media company. The four-year-old company now aims to become the Netflix Inc. of reading apps by hiring a hundred scriptwriters including Hollywood veterans to collaborate on original novels in a serialized or episodic format, co-founder Seungyoon Lee told Bloomberg News.

Radish joins a coterie of established players like Naver Corp. and Tencent Holdings Ltd.’s China Literature in a fast-growing online entertainment segment. Beyond just proving reading material on phones, serialized content from general fiction to comics have successfully made the transition to TV shows and feature films. Radish seeks to create and own intellectual properties that could anchor TV and movie franchises similar to Walt Disney Co.’s Marvel Entertainment, Lee said. Its daily revenue has risen more than 20 times to US$100,000 from about 700,000 monthly users since it scored a hit with its original werewolf romance and other popular series last fall.

“People think fiction as something very outdated but I think no one really innovated on that,” Lee said in the lobby of a Seoul hotel that’s become his home since he flew back to Seoul from New York in March. “But fiction is still the building block of all type of content and story is the most important element of any entertainment content, from TVs and games to movies.”

With more original content, the startup aims to reach about US$10 million in monthly revenue with five million monthly active users by the end of 2021, said Lee, who is also Radish’s chief executive officer. By adopting Hollywood’s collaborative model, Radish’s growing stable of in-house soap-opera scriptwriters -- including several Emmy Award winners -- now conceive new episodes in genres ranging from thrillers and LGBTQ novels to romance every four or six hours. Most of the episodes are free for a limited time but users pay to access stories immediately.

“We want to be the leanest, fastest hit production studio,” Lee said. “We want to be able to create hits at a cheaper cost and a faster pace than any other Hollywood studio.”

Radish has its roots in a fairly carefree childhood. Growing up in Seoul, the young Lee enjoyed reading books and listening to music in his down time while his parents were out at work -- unlike his friends, who frequented cram schools. After entering Oxford University, Lee became president of the college’s debating club -- the Oxford Union -- where he grew interested in entrepreneurship through invited guests such as Peter Thiel and Korean rapper PSY. He founded a U.K.-based crowdfunded media platform, but pivoted the company to Radish within one and a half years when he realized limitations in scaling the news business.

Radish has raised more than US$68 million in total including previous seed-funding. Some of its early investors include Lowercase Capital and Joy Luck Club wordsmith Amy Tan. SoftBank Ventures Asia, a venture capital arm of SoftBank Group Corp., thinks Radish has the potential to become a global content platform if it continues to expand into popular genres.

“With this pace of growth, we look forward to seeing Radish becoming a unicorn in the next two or three years,” JP Lee, chief executive officer at SoftBank Ventures Asia, told Bloomberg.