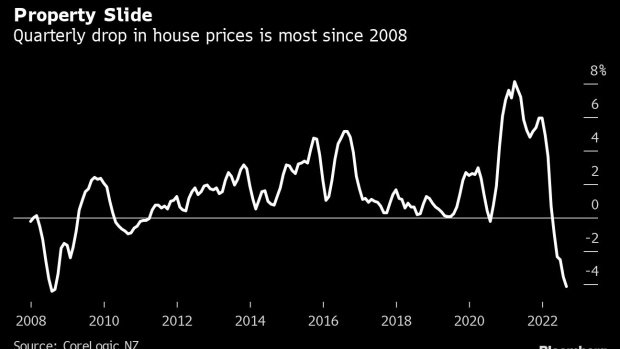 (Bloomberg) -- New Zealand house prices suffered one of their biggest quarterly drops on record in the three months through September, and the worst may not be over.

That’s according to CoreLogic New Zealand, which said the 4.1% quarterly decline is second only to a 4.4% drop in the wake of the global financial crisis 14 years ago. Prices fell for a sixth consecutive month, easing 1.5% after a 1.8% fall in August, while the annual rate of increase dropped to 2.8%, the lowest since 2019, CoreLogic said Wednesday in Wellington.

“As interest rates have increased, and credit is harder to attain, the housing market is firmly in retreat following an exceptional period of growth,” said Head of Research Nick Goodall. “Despite the rate of decline easing in September, it’s probably too early to suggest the housing market has moved through the worst of the downturn.”

CoreLogic estimates house values surged 41% over a 19-month period through March this year, when the Covid-19 pandemic closed borders and fiscal and monetary stimulus drove a rush to ownership. Now prices are falling as the Reserve Bank raises rates aggressively to tame inflation, with a fifth straight half-percentage-point hike to 3.5% expected later today.

Property values continued to decline across all six main centers in September.

Some economists predict the RBNZ will keep raising the Official Cash Rate in 2023, possibly as high as 4.75%, which Goodall said would likely prolong the downturn in the housing market.

“Increases to the OCR may not pass on fully to mortgage interest rates, with competition strong among the banks and forecast increases in the rate also already priced into short-term rates,” he said. “However, with expectations of more increases to come it may be premature to expect the end of the downturn to be here any time soon.”