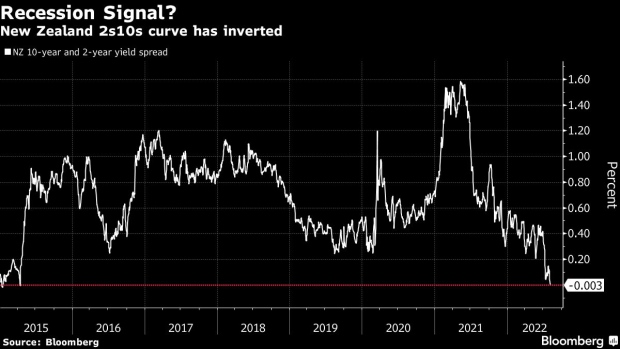 Wellington harbour and the city's skyline are seen from an observation deck at Mount Victoria Lookout in Wellington, New Zealand, on Wednesday, July 29, 2020. New Zealand’s border is closed to all foreigners, while citizens and permanent residents entering the country must undertake a 14-day mandatory quarantine. , Bloomberg

(Bloomberg) -- New Zealand is poised to keep spearheading a global tightening cycle to rein in spiraling inflation, even as signs emerge that its rapid-fire interest-rate increases are beginning to cool the economy.

The Reserve Bank will deliver its fourth straight 50 basis-point rise at Wednesday’s policy meeting to take the Official Cash Rate to 3%, according to all 14 economists surveyed.

That would bring combined hikes since October to 2.75 percentage points, the most aggressive cycle since New Zealand pioneered inflation targeting over 30 years ago, and exceed the Federal Reserve’s 2.25 points of increases.

“Successive large rate hikes mean that the gap between where the RBNZ is and where it needs to be has narrowed significantly,” said Michael Gordon, acting chief economist at Westpac Banking Corp.

That “could allow” the bank to return to normal-sized 25 basis-point moves, he said, while adding that Westpac expects the RBNZ will want to get “the job done quickly” rather than dragging it out.

New Zealand’s economy is running near full capacity and the central bank has been driving up borrowing costs to try to keep inflation expectations anchored. The 10-month tightening cycle is now beginning to show effects on both the property and labor markets.

The question for investors is whether policy makers signal they will stick with outsized moves and deliver two more half-point hikes this year. Alternatively, they may take a cue from their Fed counterparts and flag the possibility of smaller increases.

The RBNZ was among the first to begin withdrawing pandemic-era stimulus and then shift to outsized moves earlier this year. That decision foreshadowed a similar response from central banks in the US, Australia and Canada.

New Zealand’s frontline policy status has prompted investors around the world to closely watch the bank for an indication of what may unfold elsewhere.

“While we expect New Zealand to deliver a fourth consecutive 50-bp hike in August, it could temper the pace of tightening over the remainder of 2022 as the effects of earlier tightening emerge and inflation pressures ease.”

In May, the bank projected that the OCR would climb to 3.95% in the third quarter of next year, implying a 4% peak, with modest rate cuts then beginning in mid-2024.

The rapid rate increases are beginning to show up in economic data:

As a result, economists now see a one-in-three chance of the economy tipping into a recession next year.

Last week, the market flashed a warning sign that the economy may turn down with the yield on benchmark two-year bonds rising above the yield on 10-year notes for the first time since April 2015.

Still, the picture from the data is mixed. Inflation is running at 32-year high of 7.3%, soaring above the RBNZ’s 1-3% target, and wages are rising at the fastest pace in 14 years. The central bank has a dual mandate of employment and price stability, and has said previously the labor market is too tight.

“But one thing’s for sure: with inflation so high and broad-based, and wages rising fast, under a least regrets framework the RBNZ can’t afford to make optimistic assumptions about the degree of effective monetary tightening it is delivering.”