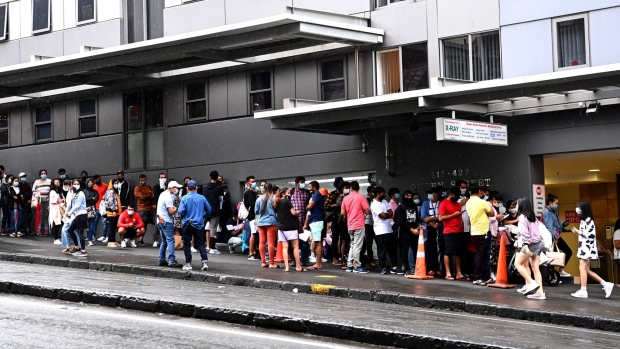 (Bloomberg) -- New Zealand will proceed with plans to start a phased reopening of the border from the end of February even as the infectious omicron variant starts to take hold in the community.

The initial phase will allow New Zealanders living in Australia to return home and undertake self-isolation rather than a lengthy stay in a managed isolation hotel. In December, the government pushed out the original start date of Jan. 17 citing the need for more people to be boosted to combat omicron.

“We will likely confirm the specific date at cabinet in the following two weeks,” Prime Minister Jacinda Ardern said at news conference Tuesday in Wellington.  “We’ve made no decision to steer away from the guidelines we gave at the end of the year.  We know now we are dealing with omicron in the community and so no changes have been made to those settings at this stage.”

New Zealand’s border has been shut to foreigners since March 2020 but citizens and permanent residents have been able to return provided they undergo managed isolation. The government planned to progressively allow more people to self-isolate rather than stay in government-run hotels in order to open the nation to the world, including eventually letting vaccinated foreigners enter the country from April 30.

The self-isolation requirement for arrivals will be an important shield to limit new omicron cases, Ardern said. New Zealand moved to tighter Covid restrictions late Sunday as cases began appearing in the community. Ten new omicron cases were reported Tuesday taking the total to 29, but some large private events are being assessed as exposure events.

Separately, Ardern today announced fresh guidance on mask wearing including ruling out people wearing scarves, bandanas or pulled-up teeshirts rather than a dedicated face mask. Stricter requirements will be imposed on the use of masks in hospitality outlets, while customer-facing workers will need to wear medical-grade masks.

The government is set to unveil more details of its approach to combat omicron Wednesday, including information on the use of rapid antigen testing and isolation requirements. Ardern said today that a test-for-work regime will apply for critical workers including those in the supply chain and food processing. Workers can submit a negative antigen test to be able to return to work.

Ardern reiterated the rapid tests will be free to all those who need them, but said that people who aren’t a contact of a case or who aren’t symptomatic won’t be able to simply buy a kit.

“Because rapid antigen tests can produce false positives we do want to make sure we use them in the right environments,” she said. “People testing in a widespread way for no reason is not something we want to encourage. We don’t’ want someone staying at home when they don’t need to.”