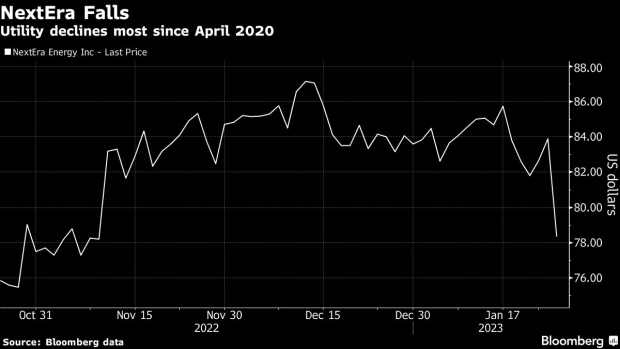 (Bloomberg) -- NextEra Energy Inc. shares fell the most in nearly three years after the head of its Florida utility retired following an internal probe into whether the company violated campaign finance laws in the state.

Shares in the biggest US solar and wind company fell 8.8%, the biggest single-day drop since April 2020.

NextEra disclosed in a filing Wednesday that the company had finished a review into news reports that its Florida Power & Light unit may have violated state and federal campaign finance statutes. While NextEra said it found no evidence of wrongdoing, the departure of the unit’s top executive rattled investors.

“The stock action today is driven substantially by the unexpected management change and the update they gave on their review into their political activity,” analyst Paul Patterson of Glenrock Associates LLC said in an interview.

US utilities have cast themselves as darlings for environmental, social and governance issues, and NextEra is poised to benefit more than most from money pouring into the clean-energy industry from the Inflation Reduction Act. But a string of utility scandals have rattled investors, including FirstEnergy Corp.’s $230 million settlement with federal prosecutors in 2021 over corruption charges and Commonwealth Edison Co.’s $200 million settlement to resolve a probe into a bribery scheme in 2020.

NextEra’s internal probe was triggered by media reports in 2021 and 2022 that alleged Florida Power & Light worked with a political consulting firm to help defeat candidates that backed a proposal that would have undermined the utility’s business by promoting rooftop solar. It included secretly funneling campaign contributions to “ghost candidates” who did little actual campaigning and ran third-party tickets to siphon votes from two the Democrats the utility wanted to defeat, according to a complaint filed with the Federal Election Commission.

One report, by the Orlando Sentinel and the nonprofit news organization Floodlight, quoted a leaked email allegedly written by Florida Power & Light CEO Eric Silagy, saying he wanted to make one of the candidate’s life “a living hell.”

In the filing Wednesday, NextEra said its review found no wrongdoing by company officials. “Based on information in our possession, we believe that FPL would not be found liable for any of the Florida campaign finance law violations,” the company wrote. NextEra said in a separate statement that Silagy was retiring after 20 years with the company.

“We’re not making a connection,” NextEra CEO John Ketchum said when asked on a call with analysts whether Silagy’s retirement was tied to the campaign finance allegations.

“The second senior-level departure since the investigations began creates some uncertainty for investors,” said Andy DeVries, a utility analyst at CreditSights, referring to last year’s departure of CEO Jim Robo. With no line-of-sight to any clarity, “it becomes a ‘sell now, ask questions later’ scenario.”

The company said it plans within the next few weeks to submit a response seeking dismissal of a complaint with the Federal Election Commission.

“We do not expect that allegations of federal campaign finance law violations taken as a whole would be material to us,” the CEO said.

(Adds context in first and sixth through eighth paragraphs.)