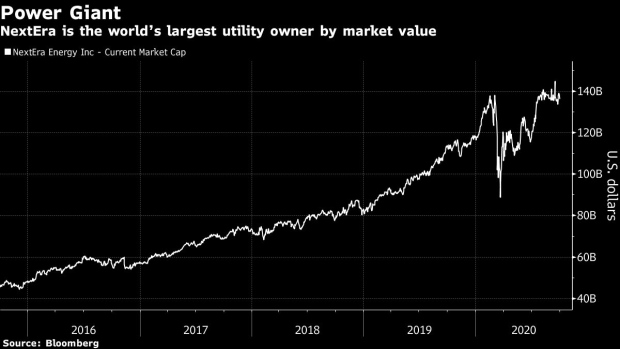 (Bloomberg) -- NextEra Energy Inc., the world’s largest utility owner by market value, recently made an unsuccessful bid to take over power giant Duke Energy Corp. in what could have been largest utility deal in American history, according to people familiar with the matter.

NextEra, based in Juno Beach, Florida, is still interested in pursuing a deal and is working with banks to help arrange financing for a potential transaction, said the people, who asked not to be identified because the details aren’t public.

A merger of America’s two largest utility owners would create a powerhouse dictating where more than 13 million homes and businesses get their power across two regions that remain heavily dependent on coal, the U.S. South and Midwest. NextEra became the world’s first utility to top a market valuation of $100 billion last year thanks in large part to its clean-power business, and Charlotte, North Carolina-based Duke has laid out its own plan to transition away from fossil fuels to renewable energy to fight global warming.

Duke shares rose as much as 8.3% Wednesday while NextEra dipped 3%. Duke declined to comment. NextEra didn’t respond to requests for comment.

Utility acquisitions in the past have often involved small targets being bought by larger neighbors, or larger companies with weak balance sheets being taken over after they have experienced some kind of significant setback.

“If this proves serious, this would open a new arena of mega-mergers in the utility space,” Bloomberg Intelligence utility analyst Kit Konolige said in an email.

The prospect of a Duke-NextEra transaction would be different type of utility deal, involving two huge, healthy companies.

NextEra owns two utilities that serve more than 5 million customers, and has wind and solar farms in about two dozen U.S. states and four Canadian provinces. The company has been hunting for a big utility takeover for years after attempts to buy Hawaiian utility Hawaiian Electric Industries Inc. and Texas electric distributor Oncor Electric Delivery Co. failed. It announced Tuesday that it had agreed to buy GridLiance, which owns about 700 miles of high-voltage transmission lines, for about $660 million from Blackstone Group Inc.

Taking over Duke’s territory in Florida, North Carolina and Indiana would be a particularly good fit for NextEra, given its push to replace coal-fired plants with wind and solar farms, Credit Suisse Group AG analyst Michael Weinstein said in a research note. At the same time, Duke’s multi­state footprint could make it challenging to secure the needed regulatory approvals for a deal, Wells Fargo & Co. analysts led by Neil Kalton said in a note.

Duke, which provides electricity service to 7.8 million customers in six states, has a market valuation of about $61 billion, while NextEra ended Tuesday with a market value of $139 billion. Duke has traditionally been seen as a buyer as opposed to a takeover target. It is one of many companies interested in taking over South Carolina’s troubled Santee Cooper utility and Florida’s Jacksonville Electric Authority.

Duke suffered a major blow in July when it was forced with partner Dominion Energy Inc. to kill plans for the controversial Atlantic Coast gas pipeline along the U.S. East Coast, citing ongoing delays and “cost uncertainty.” It has also been under increasing fire in recent years over the use of coal ash ponds that store waste at coal-fired power plants.