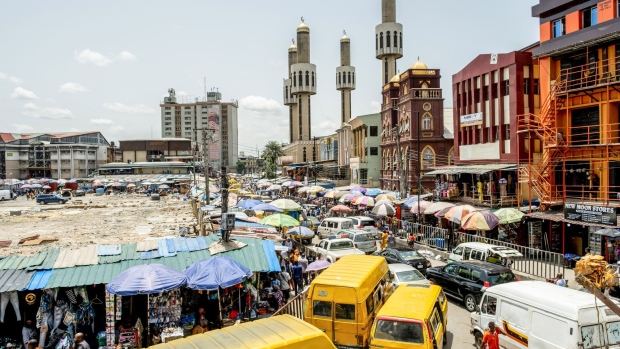 Heavy traffic surrounds the roads by a market in Lagos, Nigeria, on Friday, April 22, 2022. Choked supply chains, partly due to Russia’s invasion of Ukraine, and an almost 100% increase in gasoline prices this year, are placing upward price pressures on Africa’s largest economy. , Bloomberg

(Bloomberg) -- Nigerian inflation accelerated to an eight-month high in April as the cost of gas and food items such as bread and cereals climbed on the back of surging global commodity prices.

Annual food inflation accelerated to 18.4% from 17.2% in March. The surge sent the headline rate to 16.8%, according to data released on the National Bureau of Statistics’ website on Monday. That’s the highest level since August and exceeds the median estimate of 16.4% by four economists in a Bloomberg survey.

Nigeria’s monetary policy committee meets next week and is likely to keep the key interest rate on hold as it remains focused on stimulating growth, even as inflation has breached the upper bound of its 6% to 9% target range for almost seven years. Governor Godwin Emefiele reiterated at the last MPC meeting that he remains committed to ensuring the economy’s fragile recovery isn’t derailed while per capita income and the unemployment rate are at unacceptable levels.

It is unclear whether Emefiele, who has expressed his interest in running for president, will chair next week’s MPC meeting as President Muhammadu Buhari has given senior officials until midnight on Monday to resign if they plan to run.

Annual core inflation accelerated to 14.2%, compared with 13.9% in the prior month driven by gas and liquid fuel costs. Prices climbed 1.76% against the previous month.