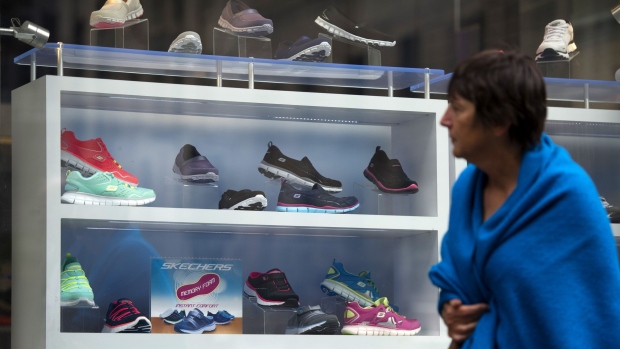 A pedestrian walks in front of a window display at a Skechers U.S.A. Inc. store in San Francisco, California, May 10, 2013. Bloomberg/David Paul Morris

Nike Inc. has increased the pressure on Skechers USA Inc., filing another lawsuit accusing its rival of building its business by copying patented shoe features.

“Instead of innovating its own designs and technologies, Skechers’ business strategy includes copying its competitors’ designs and using innovative technologies developed by others to gain market share” Nike said in the complaint.

This is the fourth lawsuit Nike has filed against Skechers, including one that accused Skechers of copying the iconic Chuck Taylor shoes that’s been simmering for five years.

Separately, a U.S. International Trade Commission judge earlier this month found that Skechers wasn’t infringing Nike trademarks; the case now heads to the full commission for a final decision. A 2017 lawsuit Nike filed over patented designs for its Flyknit is pending in Oregon.

In a lawsuit filed Sept. 30, Nike claimed that Skechers was copying patented features of its VaporMax and Air Max 270 designs. Skechers responded by posting a full-page ad in the New York Times and Twitter that called Nike a “bully” and said the company was using “its vast resources to stifle competition in the courtroom rather than compete in the marketplace.”