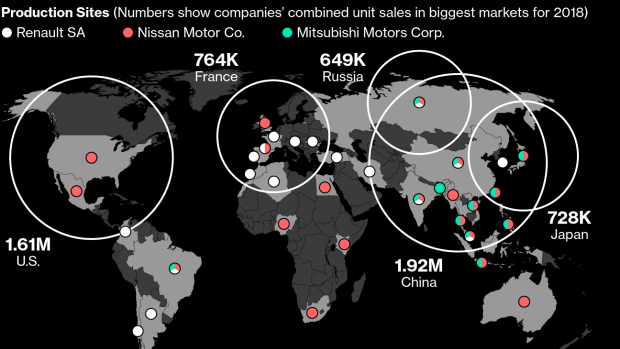 (Bloomberg) -- Even before its powerful former chairman Carlos Ghosn was arrested, Nissan Motor Co. was struggling. Now, the Japanese carmaker has to find a way to move on with its once-champion and savior locked in a Tokyo jail cell.

Nissan sold 5.65 million cars last year, about half of what Volkswagen AG and Toyota Motor Corp. each sold. The world’s fifth-largest auto brand has seen profit and sales falter amid an aging model lineup and a run of emissions scandals.

On Wednesday, the Yokohama-based company said it will likely miss its full-year profit goal, earning less than its alliance partner Renault SA for the first time in a decade. Nissan cited higher costs related to U.S. warranties, an “adverse operating environment” and the “impact of recent corporate issues on sales.”

As the global car market undergoes a seismic shift toward electric cars and self-driving vehicles, here’s a list of the top challenges facing the company.

Staying Ahead on Electrification

The Yokohama-based carmaker can still boast that it has the best-selling, plug-in electric vehicle: the Leaf. The hatchback, the product of Ghosn’s $5 billion plan to eliminate gas guzzlers, is a solid success with more than 380,000 units sold since 2010.

But rivals are chipping away at that lead with advancements in battery capacity, wireless connectivity and autonomous driving. China, the world’s largest auto market, is moving aggressively toward an EV-only future, as seen by the multitude of models at the Shanghai auto show in April.

And while the Leaf is the single-best selling EV model, Tesla Inc. is winning when it comes to cumulative sales.

Nissan was among the first automakers to introduce semi-autonomous technologies in mass-market models, yet the capabilities of its ProPilot system fall short when compared with self-driving features offered in a Mercedes-Benz, Audi or Tesla. Other brands also are surpassing Nissan, with Honda Motor Co. teaming up with General Motors Co.’s Cruise and Toyota shifting toward autonomous mobility.

Nissan’s shares are down about 30 percent from a peak in 2015 as profit and sales started eroding a year later. Renault shares closely track those of its Japanese partner, mainly because Nissan’s dividend contributes to more than half of Renault’s bottom line through payouts. At 6 percent, Nissan’s annual dividend yield is among the most generous of big Japanese companies.

That dividend policy also explains why the shares have hardly budged since Ghosn’s arrest, according to Arifumi Yoshida, an auto analyst at Citigroup Global Markets Japan Inc. “The company fully understands that the current dividend level serves as a support for the share price,” he said.

Nissan’s operating profit rose to the highest in more than a decade in 2016, helped partly by a weak yen. When Ghosn arrived in the late 1990s, Nissan was reeling from years of losses, and its profit margin was about 2 percent. Now, it’s closer to 5 percent.

Renault owns 43 percent of Nissan, while the Japanese carmaker holds a 15 percent stake in Renault. The cross-shareholding agreement between the two automakers has long been faulted as a lopsided alliance: Nissan contributes more revenue and profit, yet Renault owns the bigger stake.

Over the past few years, however, Renault’s profit growth has outperformed Nissan, fueled by a recovery in European demand. Now that gap has essentially disappeared.

Nissan’s sales in the U.S. and China aren’t keeping pace with peers. Nissan’s promotional campaigns are among the least effective in the U.S., as measured by the size of its market share relative to its spending on incentives. Meanwhile, Nissan has recalled hundreds of thousands of cars and admitted to falsifying emissions tests.

Nissan’s 2019 sales may fall to 5.3 million units and probably will remain lower than last year’s for many years to come, according to a forecast by IHS Markit.

Chief Executive Officer Hiroto Saikawa, Ghosn’s protege-turned-accuser, initially voiced his intention to step down once Nissan’s governance was back on track, but later said he may stay longer. Under the alliance agreement revised in 2015, Renault is obliged to stand by Nissan in decisions including nominations.

But Saikawa started to lose the confidence of shareholders as early as 2017, underscored by the fact that roughly half of minority shareholders voted against his appointment then, said Zuhair Khan, an analyst at Jefferies Inc. in Tokyo. At the extraordinary shareholders meeting in April, stockholders peppered him with questions about why he wasn’t stepping down to take responsibility for Nissan’s poor governance.

“It’s not obvious how this will play out, but it is highly likely that a significant majority of Nissan’s minority shareholders will not support Saikawa’s reelection,” Khan said. “That will exert pressure on Renault.”

If Saikawa steps down, one possible successor is Yasuhiro Yamauchi, who was appointed chief operating officer this week. A longtime Nissan executive with ties to Renault, Yamauchi is filling a position that had been left open for several years, with the duties shared by Yamauchi and others including departed Chief Performance Officer Jose Munoz.

Another potential leader is Executive Vice President Hideyuki Sakamoto, who joined the board in 2014 and now is in charge of manufacturing and supply-chain management. Sakamoto joined Nissan in 1980 after graduating from the Tokyo Institute of Technology with an engineering degree. He worked around the world since then, including at the Nissan Technical Center in North America, Nissan’s largest affiliate supplier in Japan and Renault in Brazil.

While Ghosn’s arrest shook the three-way alliance to its core, Nissan, Renault and Mitsubishi Motors since made a renewed effort to put it back on track. They adopted a new governance structure in March, with a single board to oversee the alliance and streamline operational decisions. That was followed by Nissan agreeing to add more independent directors and embracing a new set of corporate governance rules to abolish a structure that’s been criticized for putting too much power in the hands of a single executive.

The alliance needs to be rebalanced “in spirit” to counter fears among the Japanese carmakers that Renault wants to dominate the decades-old partnership, Renault Chairman Jean-Dominique Senard said in April.

The scale and savings from the alliance will outweigh any benefits from operating as separate entities. Renault and Nissan cooperate on technologies, manufacturing, supply-chain management, purchasing and human resources.

The alliance helped Renault and Nissan share expenses, and together the companies bring more heft to the table when negotiating with suppliers. They also benefit from each others’ geographic footprint: Renault is stronger in Europe, while Nissan provides links to China and the U.S.

--With assistance from Kae Inoue.

To contact the reporter on this story: Ma Jie in Tokyo at jma124@bloomberg.net

To contact the editors responsible for this story: Young-Sam Cho at ycho2@bloomberg.net, Lena Lee, Michael Tighe