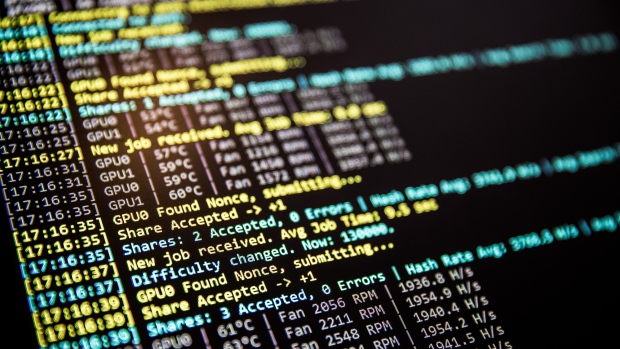 A computer monitor displays data on the temperature, fan speed and hash rate of graphics processing units as they mine cryptocurrency pools for Electroneum in Budapest, Hungary, on Wednesday, Jan. 31, 2018. Cryptocurrencies are not living up to their comparisons with gold as a store of value, tumbling Monday as an equities sell-off in Asia extended the biggest rout in global stocks in two years. , Bloomberg

Want to know what one of Canada’s top-performing companies is up to? You’ll have to go to Constellation Software Inc.’s (CSU.TO) website and submit a question online.

That’s about the only option investors have to hear management thoughts on strategy until the firm’s next annual meeting in 2019. The Toronto-based Constellation has canceled quarterly earnings calls, further drawing a curtain around one of the most opaque companies on the S&P/TSX Composite Index.

“In past conference calls, they would be asked about their acquisition process and I think that especially with calls being transcribed and made public for people to search to see what you said, that likely made them uncomfortable,” said Howard Leung, an analyst at Veritas Investment Research Corp., in a phone interview.

The move to end regular calls, including for second-quarter results on Thursday, only adds to an air of mystery around the company, whose growth-by-acquisition model has given it a market value of $22.4 billion. Founder and Chief Executive Officer Mark Leonard has only two lines of description under his bio on the firm’s spare website and doesn’t give media interviews.

The Q&A portal, which answers “selected” investor questions “will eventually prove to be a more effective tool than the conference calls because it will be searchable and will provide an archive of all previous responses,” according to statement from the company in February when it first made the move. The company declined to comment further on the change.

Constellation has published responses to ten questions since April. During its fourth-quarter call in February -- the last time it held one -- executives responded to more than 20 questions.

The Ontario Securities Commission doesn’t require publicly traded companies to host calls but recommends they hold an “open and accessible conference call” after any material disclosures, such as earnings, as part of its disclosure standards policy.

Investors don’t seem to mind the lack of quarterly calls. The company is the top performing stock on the Canadian benchmark in the eight years through Tuesday with about a 25-fold gain, according to data compiled by Bloomberg. The shares smashed through the $1,000 level in May and closed at $1056 on Tuesday, giving Leonard’s 2.1 per cent stake as of March a market value of about $460.5 million, the data show.

Veritas’s Leung said that of the 10 companies that he monitors, Constellation is the only one that doesn’t hold calls. Yet he’s satisfied with the availability of information the company does give.

"I have to say that it does make it more difficult, but there are also other metrics that you can look at when valuing a company,” Leung said in a phone interview. "And they do have an annual general meeting which is pretty accessible with a pretty long and open Q&A session."

Constellation’s AGM, the most recent of which was held in April, includes breakout sessions with each of the company’s six operating groups to allow analysts and investors the opportunity to dig into different line of business, according to a statement. After shareholder pressure at that April meeting, Constellation became the last company in the S&P/TSX 60 to add a woman to its board. Leonard also sends a yearly letter to shareholders where he comments on the company’s performance and outlook.

The stock has five buys, seven holds and no sells, according to analyst ratings compiled by Bloomberg. Leung had a sell on the company earlier this year on concern that Constellation would run into roadblocks that could slow growth. He upgraded that to a buy in March for two reasons: management expanded its mergers and acquisitions team and in January it scored its second-largest deal since going public in 2006.

The deal signaled to the market Constellation “could be successful in that field in addition to what they’re really good at, which is buying small, niche companies at significantly lower prices."

"Clearly this is a company that feels they are in a strong position and their prospects are good and they don’t feel like sharing information," said Partha Mohanram, who holds the John H. Watson chair in value investing at University of Toronto’s Rotman School of Management.