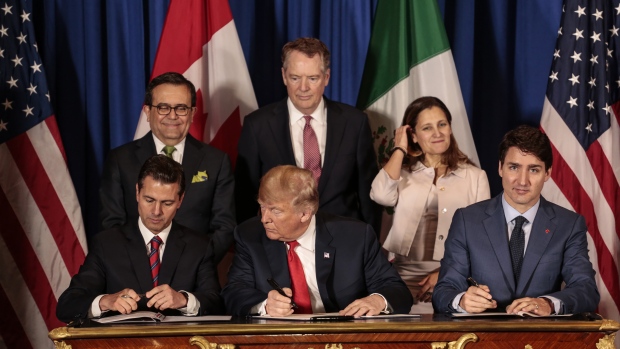 The C.D. Howe Institute says negatives will outweigh the positives for all three parties to the new Canada-United States-Mexico free trade agreement but it will hit Mexico hardest and the U.S. the lightest.

In a new analysis to be released Thursday, it says Canada's real gross domestic product is expected to shrink by 0.4 per cent and its "economic welfare" -- a measure of the value of household consumption -- will decline by more than US$10 billion.

The trade deal was signed in November, but has yet to be ratified and implemented.

The report says the overall impacts of CUSMA, as it's known in Canada, are "relatively small" and will likely be seen in "less robust growth" rather than observed as outright declines in trade and economic output.

Report co-author Dan Ciuriak says most of the negative affects of the trade deal result from the U.S. quest to protect its manufacturing sector and, as a result, hurts Canada and Mexico more because trade within North America is a bigger part of their economies.