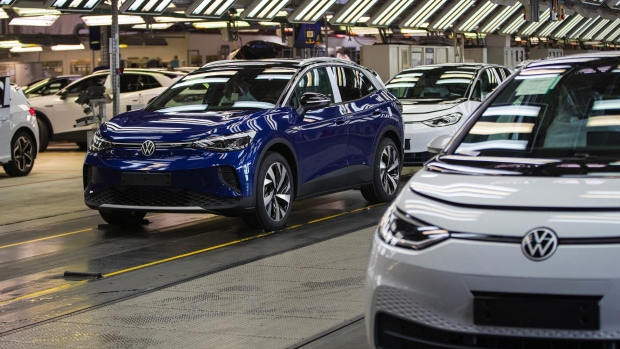 (Bloomberg) -- Northvolt AB’s massive battery-cell order from Volkswagen AG makes clear the startup will be as indispensable to the German manufacturer over the next decade as Panasonic Corp. has been to Tesla Inc. over the last one.

VW has ordered up more than $14 billion of battery cells from Northvolt over the next 10 years, a huge show of confidence in a company that hasn’t yet started production. VW will boost its stake in the closely held startup from about 20% to an undisclosed higher level.

The partnership is similar to Tesla’s tie-up with Panasonic, which dates back to 2009. In the following two years, the Japanese manufacturer invested in and entered a supply agreement with the young and inexperienced car company. The roles are reversed in VW’s case, with the auto giant betting on the unproven battery maker.

Northvolt’s big ambition is to shift the balance of battery-making power toward Europe from Asia. It’s planning to play an outsize role, having now secured more than $27 billion worth of contracts from key customers, according to a statement. The company founded by two former Tesla executives is building its first large-scale factory in Skelleftea, northern Sweden, which is on track to start production by year-end.

The plant will expand from its original blueprint under the new agreement with VW. Other customers include BMW AG, which announced a 2 billion-euro ($2.4 billion) order in July.

“Volkswagen is a key investor, customer and partner,” Northvolt CEO Peter Carlsson said in the statement. “We will continue to work hard with the goal to provide them with the greenest battery on the planet as they rapidly expand their fleet of electric vehicles.”

Northvolt is among the beneficiaries of European Union governments plowing billions of euros into battery projects to make member countries more self-sufficient as the auto industry phases out the internal combustion engine. The European Commission in January unveiled a second package of subsidies in as many years, bringing the total sum of support to 6.1 billion euros. The bloc expects the funds to generate another 14 billion euros in private investment.