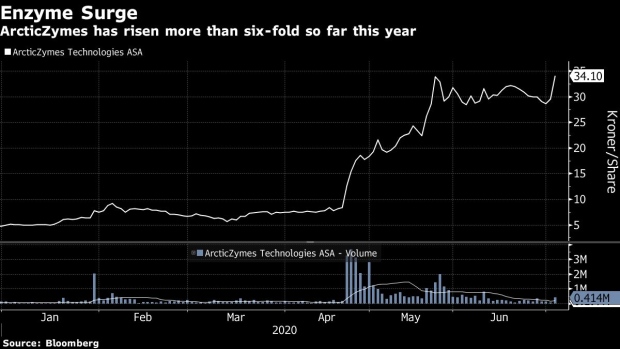 (Bloomberg) -- ArcticZymes Technologies ASA, a Norwegian biotechnology company, has seen a seven-fold increase in its share price so far this year as it benefits from the pharmaceutical industry’s Covid-19 efforts, making it Norway’s best-performing stock so far in 2020.

The company, based in Tromso on Norway’s northwest coast, extended its surge on Thursday after it said it would supply materials for a possible vaccine against Covid-19. That prompted its shares to climb as much as 18% in Oslo.

ArcticZymes, which last month changed its name from Biotech Pharmacon, searches for enzymes in the Arctic waters and then uses them to help develop products that are used in molecular research, diagnostics and therapeutics, according to its website.

The company implemented a new strategy this year, focusing on its enzymes business and vowing to make profits after years of losses. The company more than doubled sales in the first quarter, driven by deliveries for the development of coronavirus tests. That led to a 52% increase in its share price on April 23, its biggest jump in a single day this year.