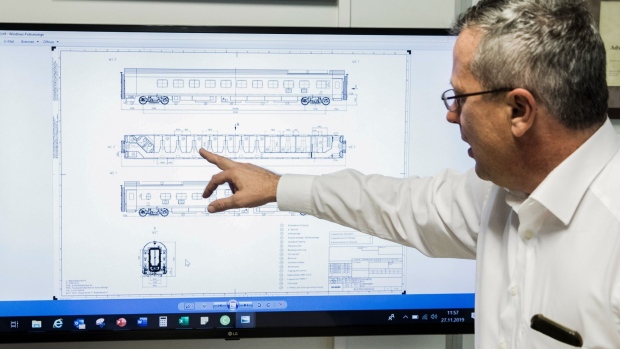 (Bloomberg) -- Romanticized by movies like “Murder on the Orient Express” and “From Russia With Love,” sleeper trains had all but disappeared in Europe. Now, some of their magic is being revived -- with a modern twist.

In the last century, nocturnal trains with their wood-paneled cabins and plush lounges were the stuff of adventure, chugging along through the night from Paris to Istanbul or London to Venice. But as high-speed rail connections shrank distances, low-budget airlines emerged and European Union regulations made night trains economically untenable, sleepers lost their allure. One by one, Europe’s great rail lines terminated or dramatically cut international night-train services.

Now, with environmental activist Greta Thunberg’s “flight shaming” making people more aware of their carbon footprint, the night-train industry is seeing a renaissance. It’s luring a new class of traveler -- not the small but wealthy group of people of leisure who traveled on opulent trains like the Orient Express, but ordinary business people and tourists with a climate conscience.

“We were at a point where I thought, it’s over,” he said. “People were switching to planes and high-speed day trains. Popular connections were shut down.”

The service between Zurich and Madrid ended in 2013. Connections between Germany and Amsterdam, Denmark and Paris were halted in 2014. Italy’s Trenitalia stopped its Rome-Paris service in 2015. In 2016, Deutsche Bahn AG ended its sleeper service, while France’s SNCF terminated a dozen night trains. That’s left Europe with a rolling stock of sleeper carriages well over 30 years old, used mostly for domestic routes.

Now, breathing new life into the business for Siemens is a 200 million-euro ($221 million) order from Austria’s Oesterreichische Bundesbahnen-Holding AG. OeBB, as it’s known, is western Europe’s only rail service to not just buck the trend but to take sleeper trains up a notch.

On Dec. 16, Siemens will start making 13 new night trains for OeBB at its factory in Vienna's Simmering district, where trains have been made since the Habsburg Empire's 19th century railway boom. Carriages that’ll give sleeper cars their first major design overhaul in six decades will be ready for testing by late next year. The Austrian state rail company’s order is Siemens’s first and only such contract from a western European rail company in the past 15 years.

The new cabins designed by London-based industrial studio PriestmanGoode are inspired not by the Orient Express but by the first-and-business class compartments of airlines and minimalist hotels like Premier Inn’s ZIP or Starwood Capital’s Yotel.

“We’ve tried to bring a more domestic feeling to the experience; thought about what environment people are experiencing at home, in hotels, bars, or restaurants,” said Kirsty Dias, a designer at the studio.

Austria, located at the continent’s center and cursed with second-tier airports, never gave up on night trains.  OeBB bought coaches Deutsche Bahn was retiring and took over routes such as Hamburg-Zurich and Zurich-Berlin.

Its night-train passenger numbers are set for a 10% gain this year. Some links like Vienna-Zurich have grown more than 20%. The company has revived its Vienna-Venice link. In January, it’s starting a Vienna-Brussels connection for travelers to the EU’s de-facto capital, a move Social Democrat lawmaker Andreas Schieder welcomed in a tweet. Four German lawmakers are now clamoring for a Berlin-Brussels link, which OeBB could serve in cooperation with Deutsche Bahn.

Thunberg’s home country of Sweden is preparing a public tender for new overnight services to other European countries, after passenger numbers on northbound night trains from Gothenburg and Stockholm to the Arctic rose 43% from their low point in 2014. In November, Norway's Railway Directorate recommended boosting night-train capacity. The Swiss are considering reintroducing their wagon-lits ended in 2009. Trenitalia, which has kept domestic night trains, is spending 300 million euros on new locomotives and refurbishments. The Caledonian Sleeper connecting London and Scotland has been upgraded.

EU rules meant to make train services better and cheaper are at least partly to blame for the past retreat of cross-border sleeper trains. Rail companies, which used to provide trains free cross-country track access, began charging for it after the EU pushed for greater competition. The fee hit night trains hard because they travel longer distances and carry fewer passengers per car.

“A separate charge for night trains, which could be lower, could make quite a difference for cross-border trains,” said Dick Dunmore, an associate at Steer Group, a consultancy that wrote a 2017 study on sleepers for the European Parliament.

Europe’s hodgepodge of national rules, which a 2018 report put at 11,000, haven’t helped. The report noted, for example, that Austria and Italy require train drivers to speak the national language but differ on whether reflective boards or tail lights can be used on cargo trains. For Siemens's new OeBB sleepers, national rules will mean a year of tests for regulatory permits from every country the trains will pass through.

Air traffic, in contrast, is harmonized. Also, aircraft fuel doesn’t get taxed, allowing airlines to cut prices. Train travel in Europe has become unreasonably expensive and is often inefficient, according to Austrian Member of Parliament  Julia Herr, who missed the opening of the climate summit on Monday in Madrid because her night train from Vienna to Zurich was three hours late, leaving her with few options for connecting trains.

“Flying is very energy intensive, but the externalities generated by fuel consumption aren’t reflected in the cost of the flight,” said Thomas Sauter-Servaes, a transportation expert at Switzerland’s ZHAW School of Engineering.

That includes the carbon footprint of airlines. A Paris-Venice flight generates about 105 kilograms of CO2 per passenger compared with about 29.4 kgs by train.

In the face of such numbers, there are calls for EU regulators to return to the drawing board. Lower track access charges at night are at the top of the wish list, which also includes harmonized cross-border systems with integrated tickets and timetables.

“In Europe, there’s a future for two reasons: The first one is flight shaming, which makes people think twice before taking a flight; the other is that we’re slowly aiming for a single railway area in the EU,” said Francois Davenne, the director-general of the Union Internationale des Chemins de fer, the worldwide railway organization.

That makes OeBB’s efforts to upgrade its service seem prescient. Its new coaches, due to roll from 2022, will have more sleeper wagons, “pods” for more privacy for budget travelers, deluxe cabins with longer beds and wheelchair-accessible compartments.

Siemens’s Winkler, who recently took a night train from Vienna to Venice, says he’s made up his mind:

“I’ll definitely not take the plane on that route again,” he said.

--With assistance from Niclas Rolander and Mikael Holter.

To contact the authors of this story: Boris Groendahl in Vienna at bgroendahl@bloomberg.netCatherine Bosley in Zurich at cbosley1@bloomberg.net

To contact the editor responsible for this story: Vidya Root at vroot@bloomberg.net