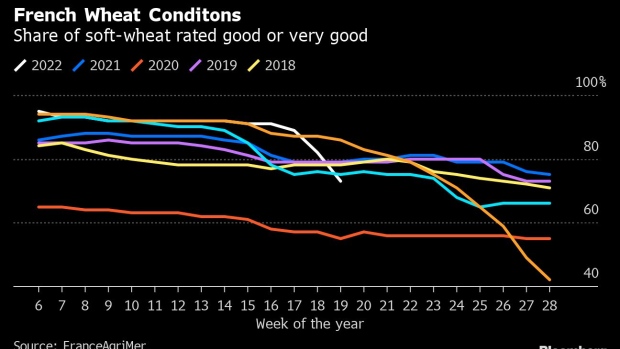 The share of the country’s soft-wheat crop rated in good or very good condition fell to 73% as of May 16, putting ratings below this time last year, according to the latest FranceAgriMer data. A dry, hot streak across France is draining soil moisture during a vital period for the crop’s development, with weekend temperatures expected to swelter above 35 degrees Celsius (95 degrees Fahrenheit) in many cities, forecaster Meteo France said in a note.

The summery spell means the nation is likely to record its hottest ever month of May, surpassing 2011, the forecaster said. That threatens to curb wheat yields in the country, adding to weather woes in other producers like the US and Canada at a time when Russia’s invasion of Ukraine is already curbing global grain supplies.

The International Grains Council on Thursday cut its outlook for world wheat production to 769 million tons, a three-year low. Weather-wise, France is Europe’s area of greatest concern for winter-crops like wheat, Kyle Tapley, meteorologist at Maxar, said at the GrainCom conference in Geneva.

Here’s a breakdown of French crops in good or very good condition: