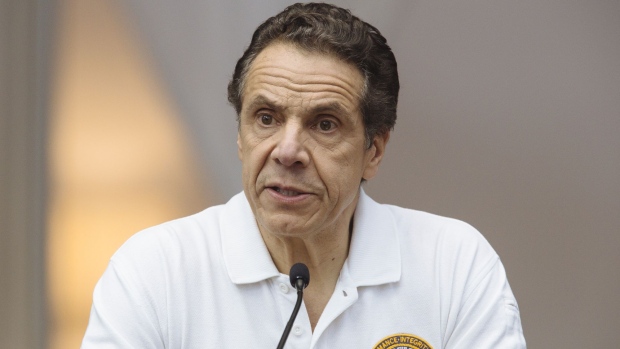 (Bloomberg) -- New York City is set to be the only region of the state on lockdown after next week.

Long Island and the Mid-Hudson regions are on a trajectory to reopen, provided they see deaths continue to decline and meet contact-tracing targets, Governor Andrew Cuomo said Friday at a virus briefing. In anticipation, construction preparation can begin in those two regions.

With those areas, nine of 10 New York regions will have begun phased-in restarts, after more than seven weeks on lockdown. New York City still has met only four of the state’s seven reopening metrics, due largely to a lack of capacity at the city’s hospitals. It also must continue to build up its number of tracers, according to state data.

“We said deliberately at the beginning of this, it’s going to be one standard that is data driven, there’s no politics here, and safe is safe,” Cuomo said. “What’s safe for your health in New York City. I’m not going to put your life at more risk or less risk than a life in Buffalo. It doesn’t work that way.”

New York state had 356,458 cases of the new coronavirus as of May 20, with more than half from New York City. Both the state and city are on a path to recovery, with fewer hospitalizations, but some metrics in the city have been slower to improve than those in regions less hit by Covid-19.

Saying the city had made major progress in its fight, Mayor Bill de Blasio on Friday unveiled a new set of metrics, in the form of charts showing the decrease in the city’s numbers of respiratory-illness patients hospitalized and in public hospital intensive care units. The city is moving toward a first phase of reopening, focusing on construction, wholesale distribution and curbside retail by the middle of June, the mayor said.

While de Blasio’s metrics are in line with Cuomo’s, it’s the state metrics that New York City must meet before reopening, the governor said. New York City had 27% of total hospital beds and 28% of intensive-care beds available as of May 21, below the 30% state thresholds, which are based on guidelines by the U.S. Centers for Disease Control and Prevention.

“It’s not up to the local officials, it’s a statewide decision across the board,” Cuomo said.

New York state reported 109 deaths on May 21, for a total of 23,192. At the outbreak’s peak in April, the state was reporting more than 700 fatalities daily.