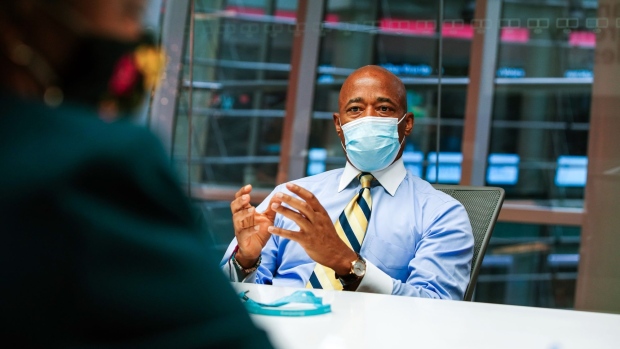 Eric Adams, president of the Brooklyn Borough and Democratic mayoral nominee for New York City, speaks during an interview in New York, U.S., on Friday, Sept. 17, 2021.Adams said he plans to split leadership of the police department into two roles and is conducting a national search for a chief and commissioner. , Bloomberg

(Bloomberg) -- New York City Democratic mayoral nominee Eric Adams pledged to create at least 70,000 jobs in his first year in office to make a dent in the city’s 10.2% unemployment rate, which is about double the national average, and revive an economy pummeled by the pandemic.

Adams, during an interview on Friday with Bloomberg editors and reporters, also said he would overhaul the city’s leadership, including potential appointments of new schools and health chiefs. He said he will split the leadership role of the New York Police Department in two and he’s launched a national search for a police commissioner.

“I’m not happy with the Department of Health and Mental Hygiene,” he said. “We don’t have a health-care system. We have the sick-care system.”

The Brooklyn borough president vowed to repair the strained relationship between the city and corporate leaders, making the city safer and government agencies more efficient for them so they can hire more workers and bring more business to the city.

“How do we reset? How do we have real conversations?” Adams said, referring to business leaders.

Taking a swipe at outgoing Mayor Bill de Blasio, who is term limited and leaves in January, Adams said he has to change the perception that the city didn’t want to work with business leaders to forge an economic recovery.

“When you don’t go to the Met Gala, say these are not my type of people, those people are business leaders,” he said, referring to the annual Metropolitan Museum of Art event that draws celebrities, designers and billionaires.  “Look at the amount of money that many of our business leaders put into our economy.”

De Blasio, who has shunned past Met Galas, attended this year.

As de Blasio finishes his last year as mayor, tourism is depressed and many small businesses remain closed. Although 61% of residents are fully vaccinated, many continue to work from home.

Adams said he believes the unemployment rate is higher than the official data. “People have stopped looking for jobs,” he said.

He vowed to make it easier to do business in New York, but he said he doesn’t want large companies to wait until 2022 to bring workers back to city offices. Technology companies including Apple Inc., Alphabet Inc.’s Google and Facebook Inc. have pushed back their return-to-office plans to January.

As of late August, 23% of Manhattan office employees had returned to the workplace, according to the Partnership for New York City, a business group. Employers expected 41% to return by Sept. 30 and 76% back by January, the group’s survey found.

Adams said that unemployment is one of the biggest things holding back the city’s recovery, noting the disconnect between unemployment and available jobs.

“When you have a high level of unemployment and a high level of jobs, you know, something is wrong here,” Adams said. “We need to really look at how do I take this person who is seeking a job, find out what skills he or she may have and make sure I partner them with those who are looking for employees in their companies.”

Adams this week challenged corporate executives to hire and train talent from minority communities. He has pledged to create a city-run job-search clearinghouse that would match hundreds of thousands of pandemic-displaced workers with jobs both skilled and lower-paying, in businesses large and small. It’s an approach recommended by the Partnership group to de Blasio in July 2020, but never acted upon. Corporations would be asked to recruit talent from the 100,000 enrolled in community colleges and job-certification programs, said Kathryn Wylde, president of the group.

“It fulfills his campaign promise to create jobs while also drawing on commitments companies made to extend greater opportunities for employment to communities of color,” Wylde said of the job-placement program. The city has about 460,000 fewer jobs than it had before the pandemic, according to Wylde.

“We are a city of small businesses,” Sliwa said in a statement. “They are key to our economic recovery.”

Adams this week told a prominent investor conference that New York would “no longer be anti-business,” without mentioning by name the current mayor. Adams said the first thing business leaders talk to him about is the perception that the city has become unsafe for their employees.

“What I have heard over and over again is public safety,” Adams said in an interview on Bloomberg Television. “From day one, I have to turn around this crime issue we are facing.”

Adams said he was unsatisfied with the health department and Covid response under de Blasio. He vowed to overhaul the way the city reaches out to diverse communities to drive up vaccination rates, and said that the city should consider mandating vaccines for eligible public schoolchildren, a policy de Blasio has spurned.

Teacher unions and public school advocates have expressed worry over millions of dollars from charter-school supporters backing Adams’s campaign. The largest teachers union didn’t support his primary campaign for mayor. Michael Mulgrew, president of the United Federation of Teachers, said he and Adams talk at least once a week. He said Adams is “on top of safety measures needed to keep schools open” and described him as “focused on being mayor.”

Adams, a 22-year veteran of the NYPD, held off a crowded field of Democratic primary challengers with a campaign focused on reducing crime and restoring quality of life in the city of more than 8 million people.

Should Adams win, he will have to govern with the cooperation of a City Council that will be more progressive than he is, in a city where he was the first choice of only about 32% of the voters. After a ranked-choice system of vote counting, he won 50.5% of the vote, edging out former sanitation commissioner Kathryn Garcia, who received 49.5%.

Adams won every city borough but Manhattan, which went to Garcia, and his labor support included the 150,000 city workers represented by District Council 37 of the American Federation of State, County and Municipal Employees, the 35,000 building workers in 32BJ of the Service Employees International Union, and the 40,000-member Hotel and Motel Trades Council.

Almost immediately, Adams will face challenges to his leadership on several policies. His advocacy of a plain-clothes anti-gun police unit and his assertions that the department could institute a stop-and-frisk program respectful of minority residents, have been criticized by the New York Civil Liberties Union and advocates of limited police use of force.

Adams said he wouldn’t commit to a crime reduction number, but said that he would pursue driving down shootings and violent crime across the city, not just in high-income areas. He also pledged to reduce NYPD overtime by 50%.

“I need to decrease the crimes in those areas that historically have not experienced a safe overall environment, and that’s my focus,” Adams said.