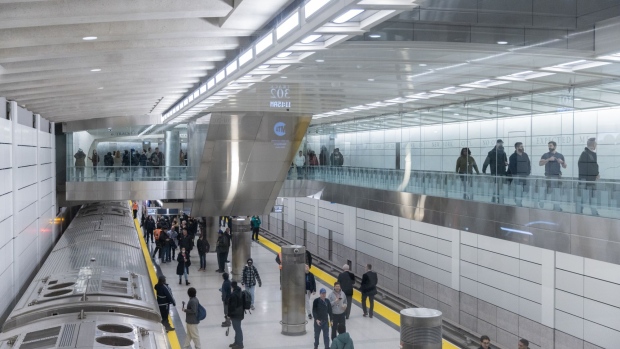 The celebration was a long time coming: Plans for a service that would cut 40 minutes from the trudge Long Islanders have to make to reach east Manhattan began more than two decades ago — when a different generation of New Yorkers blissfully unaware of the word ‘selfie’ were making the despairing commute.

Finally on Wednesday morning, numerous delays and over $11 billion later, a gaggle of excited commuters descended on Jamaica station in Queens for the inaugural ride to the new Grand Central Madison terminal.

“I rearranged my whole day to be on the inaugural ride,” said Sharon Souto, an IT worker in the finance industry who has been commuting from Long Island to Manhattan for more than 10 years. She used to take the LIRR into the Penn Station hellscape on the west side followed by a combination of subways to get to the east. “Now, it’s almost door-to-door service,” she said.

In some ways, the maiden voyage experience wasn’t what most commuters should expect: New York Governor Kathy Hochul was among the passengers and the train ride began during off peak hours, at 10:45 a.m. The Metropolitan Transportation Authority, which operates the LIRR, says there’ll be limited service for at least three weeks “so customers can acquaint themselves with the new terminal as existing schedules continue.”

Despite Wednesday’s late-morning ride, the train mimicked rush-hour crowds. “It was the one time I’d be willing to stand on the Long Island Rail Road,” said Caleb Fossum, a 24-year-old recent urban studies graduate. Fossum and his friend Sean Lomba, 23, took the ride to be part of history.

Fossum, who has loved trains since he was a kid, says he remembers going to an event years ago at Grand Central about the LIRR expansion. “One of my first, like, young memories is looking at all the stuff they gave out about this project,” he said. “I almost felt like I had to be here to see it properly open.”

The first ride lived up to expectations. The train arrived in Grand Central at 11:07 a.m., 21 minutes after leaving Jamaica.

“Welcome to the east side of Manhattan,” a conductor announced over the PA system as the train pulled smoothly into the squeaky-clean platform. Passengers clapped and cheered. “No champagne?” asked one rider in the crowd.

--With assistance from Michelle Kaske.