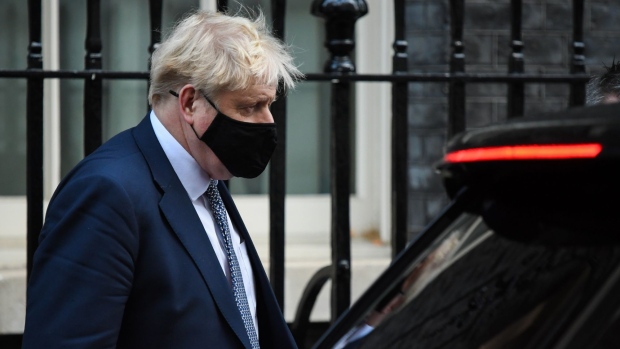 (Bloomberg) -- The U.S. Supreme Court blocked the centerpiece of President Joe Biden’s push to get more people vaccinated, rejecting an Occupational Safety and Health Administration rule that would have required 80 million workers to get shots or periodic tests.

Earlier, Biden said his administration will double its order of rapid tests to send to Americans, while also distributing “high quality” masks to help fight a surge of cases of the omicron variant. Cases among U.S. nursing-home workers jumped almost tenfold in recent weeks to a record.

New York City Mayor Eric Adams said he is considering a temporary remote option for the city’s public schools, in a stark reversal of his position. Goldman Sachs Group Inc. delayed the return of its U.S. staff to the office by another two weeks.

Chicago nurses joined colleagues across the country Thursday to protest against working conditions that they say have rapidly deteriorated as hordes of Covid-19 patients push hospitals to the limit.

The protests, organized by National Nurses United, a labor union boasting 175,000 members nationwide, was part of a jam-packed day of action across 11 U.S. states  and Washington, D.C. today “to demand the hospital industry invest in safe staffing, and to demand that President Biden follow through on his campaign promise to protect nurses and prioritize public health,” according to the union. In Chicago, members are still working and the action was part of their bargaining process, but other branches are striking.

Delta Air Lines Inc. and American Airlines Group Inc. are cutting regional flights over the next few months due to pilot shortages, extending a lingering effect from the early days of the coronavirus pandemic.

Delta has cut back by as much as 25% for the first half of this year, the Atlanta-based carrier said on an earnings call Thursday. American has dropped 580 March flights at its wholly owned Piedmont Airlines and an undisclosed number this month and next at regional partners SkyWest Inc. and Mesa Air Group Inc.

In his state of the state address Thursday, Colorado Governor Jared Polis said he will propose a three-year plan to “stabilize our health-care workforce.”

“We can’t let our society and our economy be impacted by hospital capacity,” Polis said. Colorado’s positivity rate is 30%, the highest of the pandemic, state health officials reported Wednesday.

The surge in infections may have hit a peak in the Boston area amid a steep decline of viral signals in wastewater.

Data from Boston-based Biobot Analytics, a startup that monitors Covid levels in sewage, showed that the virus concentration in the city’s wastewater samples is down more than 50% from its recent peak. The drop-off is the most dramatic to date, according to Biobot President and co-founder Newsha Ghaeli, after virus signals shooting up 10 times compared with levels a year ago.

As the omicron variant sickens people across the U.S., the attorney general of Nebraska filed a lawsuit challenging an indoor mask mandate in Omaha.

Attorney General Doug Peterson says the local order “conflicts with applicable state law,” the Omaha World-Herald reported Thursday. The indoor mask mandate will remain in effect until a court hearing Monday, the newspaper said. The state’s positive-test rate is above 36%, according to the U.S. Centers for Disease Control and Prevention.

New York City Mayor Eric Adams said he is considering a temporary remote option for the city’s public schools, in a stark reversal of his position to keep kids learning in person.

“The safest place is in school and I’m going to continue to push that,” Adams said during a press briefing on Thursday. “But we have to be honest. A substantial number of children’s parents aren’t bringing them to school. I have to make sure children are educated.”

Only about 70% of the city’s 1 million students have been attending classes since schools reopened after the winter break on Jan. 3. On Wednesday, attendance was about 76% and schools reported over 6,500 cases among students and 1,000 among staff, according to city data.

The U.S. Supreme Court blocked the centerpiece of President Joe Biden’s push to get more people vaccinated amid a Covid-19 surge, rejecting an Occupational Safety and Health Administration rule that would have required 80 million workers to get shots or periodic tests.

The court allowed a separate rule to take effect requiring shots for workers in nursing homes, hospitals and other facilities that receive Medicare and Medicaid payments from the federal government.

Norway is scaling back some of its infection restrictions as it moves into a new phase of the pandemic.

The omicron variant has pushed infection rates to records, and the country now needs to ready itself to tolerate living with the virus, Prime Minister Jonas Gahr Store told reporters on Thursday.

Restaurants and bars will be able to serve alcohol again before 11 p.m., while high schools and colleges can allow more interaction between students.

The surge of omicron cases is having a direct hit on U.S. small businesses, which employ almost half of the country’s private-sector workforce.

The share of small firms that reported a decrease in revenue rose to 33% in the week ended Jan. 9, according the U.S. Census Small Business Pulse Survey. That’s the highest since February last year.

Hundreds of millions of vaccine doses purchased by wealthy countries are at risk of going to waste, a new analysis shows, while large parts of the world remain unprotected amid the spread of the omicron variant.

About 240 million doses purchased by the U.S., U.K., Japan, Canada and the European Union are expected to go unused and expire by March, London-based analytics firm Airfinity Ltd. said Thursday in a report. The number of potentially wasted doses could climb to 500 million by that point if other countries receiving donated doses don’t have enough time to administer them, it said.

A record 57,000 nursing-home workers tested positive during the week ending Jan. 9, according to data from the Centers for Disease Control and Prevention, up from about 6,000 the week ending Dec. 19.

Cases are also spiking among nursing-home residents. About 32,000 residents tested positive last week, close to the previous peak in late 2020. While deaths have also increased, much of the nursing-home population is vaccinated, and the death rate is about one-tenth what it was last winter.

The number of Africans being inoculated against Covid-19 needs to climb to 34 million people a week, from 6 million currently, if the least vaccinated continent is to reach the World Health Organization’s target of 70% of its people fully covered by mid-year.

While vaccine supplies to the continent have improved recently, slow rollouts are hindering efforts to reach this goal, Alain Poy, head of the WHO’s vaccine preventable disease program in Africa said in a briefing Thursday.

President Joe Biden said his administration will double its order of rapid tests to send to Americans, while also distributing “high quality” masks to help fight a surge of cases of the omicron variant.

The plan to buy another 500 million at-home tests comes as the U.S. is facing a shortage, leading to long lines at testing centers across the country. At the same time, consumer prices for masks offering the highest protection are rising.

Biden said his administration is deploying military doctors, nurses and others to six hospitals in six states, including New York and New Jersey, to grapple with record hospitalizations.

Goldman Sachs delayed its return to office for staff in the U.S. by another two weeks, with employees told they could delay returning to Feb. 1, according to a person familiar with the matter.

The bank’s management, aggressive champions of having its offices filled, had to check their desire after an about turn last month amid a deluge of omicron cases sweeping across New York and beyond.

Travelers from Canada, Australia and Argentina will no longer be exempted from the European Union’s travel restrictions. Member states agreed on Wednesday to remove the trio from a list of countries whose citizens are allowed to enter the bloc under the same conditions as in pre-pandemic times, officials said.

The change means that non-EU citizens won’t be allowed to travel from those countries if they’re not vaccinated, unless it’s for essential reasons.

Boris Johnson’s government cut the Covid-19 self-isolation period in England to five days from seven as the surge in omicron infections sparked staff shortages at hospitals, schools and businesses. The reduction will take effect from Jan. 17.

The premier has relied on light-touch restrictions to manage the new virus wave, and his spokesman has pointed to early signs that U.K. cases and hospitalizations are starting to fall.

Boris Johnson has canceled a visit to a vaccination center in Burnley after a family member tested positive for Covid-19, according to ITV. The U.K. Prime Minister won’t have to isolate but is taking advice not to travel.

Johnson bought some breathing space by apologizing for attending a party at his Downing Street office during the first pandemic lockdown, but anger in his ruling U.K. Conservative Party means his grip on power is precarious.

Italy’s government is working on a spending package to bring relief to sectors hit by the surge in infections, such as tourism, and refinance furlough programs, people familiar with the matter said. The measures could be announced as early as next week and would rely on existing resources, currently estimated at around 2 billion euros ($2.3 billion), the people said.

Germany registered 81,417 new cases, a record for a second straight day, as the omicron variant continues to spread rapidly in Europe’s biggest economy. The seven-day incidence rate per 100,000 people climbed to 428, closer to the all-time high of 452 scaled at the end of November.