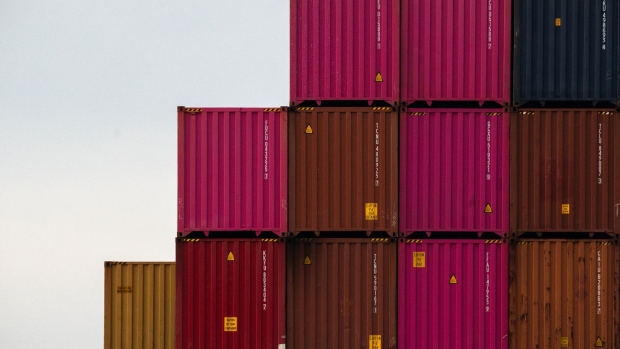 Shipping containers in the West Basin Container Terminal at the Port of Los Angeles in San Pedro, California, U.S., on Friday, Nov. 20, 2020. October was another record month for dockworkers at the West Coast port of Long Beach as more than 800,000 cargo containers were processed, a first in the terminals 109-year history. Photographer: Bing Guan/Bloomberg , Bloomberg

(Bloomberg) -- Oaktree Capital is exploring the sale of Ports America in a transaction that could value the largest U.S. terminal operator and stevedore at as much as $6 billion, according to people with knowledge of the matter.

The alternative-investment firm is working with advisers and is poised to begin soliciting interest from potential suitors in coming weeks, said the people, who requested anonymity because the talks are private. The ports business is likely to be valued at $5 billion to $6 billion, the people said.

An Oaktree spokeswoman declined to comment and a Ports America representative didn’t immediately respond to a request for comment.

Oaktree’s infrastructure arm inherited Ports America with the firm’s 2014 purchase of Highstar Capital, which owned the business through a fund raised in 2007. Brookfield Asset Management Inc. has controlled Oaktree since acquiring a majority stake in 2019.

In 2017, Turkey’s Yildirim Holding AS sought a financial partner to join its bid to acquire Ports America as part of an effort to become a top 10 container-terminal operator by 2025.