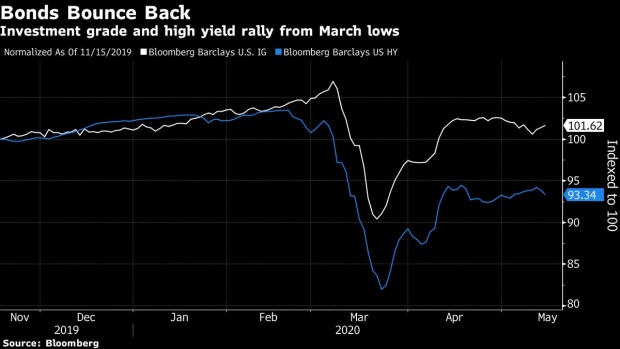 Howard Marks, co-chairman and co-founder of Oaktree Capital Group LLC, speaks during the Bloomberg Year Ahead Summit in New York, U.S., on Thursday, Nov. 7, 2019. The summit addresses the most important trends, issues and challenges every executive will need to consider in 2020 and beyond. Photographer: Mark Kauzlarich/Bloomberg , Bloomberg

(Bloomberg) -- As successful as the Federal Reserve has been propping up corporate debt prices, the support is only temporary and distress will sweep through the credit markets when the central bank inevitably steps back, Howard Marks said.

“Can the Fed keep it up forever?” Marks, the billionaire co-chairman of Oaktree Capital Group, said in a Bloomberg “Front Row” interview. “Those of us in the markets believe that stocks and bonds are selling at prices they wouldn’t sell at if the Fed were not the dominant force. So if the Fed were to recede, we would all take over as buyers, but I don’t think at these levels.”

That, in a nutshell, is the dilemma for policy makers.

Confronted by the worst economic collapse since the Great Depression, they’ve resorted to unprecedented means to keep big employers in business, including the March 23 announcement of two corporate-credit facilities with $750 billion of total spending power.

The prospect of intervention on that scale sparked an immediate surge in demand for both investment-grade and junk bonds. Now that the program has started buying, it’s unclear what happens when -- and if -- the funding runs out.

Some investors think the prices of stocks and bonds are justified by the promise of endless central bank liquidity. In other words: You can’t fight the Fed.

Marks disagrees. He expects a slow and halting recovery from the coronavirus pandemic and said “there will be plenty” of debt defaults and bankruptcies when corporate borrowers start running out of cash in the months ahead.

“There are large, highly levered companies and investment vehicles that the government and Fed rescue program is not likely to reach and take care of,” he said.

Already, Neiman Marcus Group Inc., Stage Stores Inc., Avianca Holdings SA and J. Crew Group Inc. are among the bankruptcies hastened by the economic fallout from Covid-19. In the bond market, some 540 issuers are still trading at yields that suggest a high probability of default, though that number is down from almost 900 in late March.

One example of the Fed’s efforts is Royal Caribbean Cruises Ltd. Even though cruises have been halted during the pandemic and revenue has shriveled to almost zero, the company was able to sell $3.3 billion of secured debt at a yield of about 11%.

“It’s what happens in a market which is, I would say, artificially supported by Fed buying,” Marks said.

In the 1980s, Marks became one of the first investors to specialize in beaten-down bonds. Oaktree, the Los Angeles-based firm he co-founded with Bruce Karsh, is now trying to raise $15 billion for what would be the biggest-ever fund to invest in distressed debt.

Oaktree was a “very active buyer” when credit markets were swooning in mid-March, but has pulled back since the Fed announced it would intervene, Marks said. While the central bank has committed to buying investment-grade bonds and debt recently downgraded to junk, it hasn’t extended that support to less-creditworthy issuers.

“They could do that,” Marks said. “And in theory, if they bought aggressively, they could make all the markets rise. Now everyone would know that that’s a Potemkin market, a fake, and the minute they stopped things would collapse.”

In one of his recent memos to clients, Marks quoted a saying: “Capitalism without bankruptcy is like Catholicism without hell.” In the interview, he said he worries that Fed support for the credit market will result in moral hazard -- the likelihood that those who escape the consequences for reckless behavior will be reckless again.

That’s not to say he objects to Fed support for the economy.

“Thank God that it did what it did,” he said. “Just because something has unforeseeable negative consequences, that doesn’t mean it was a mistake.”