Canada needs to consider policy measures to address its rising housing prices, according to a new economic outlook released by the Organisation for Economic Co-operation and Development.

The OECD expects an eventual removal of monetary stimulus to stabilize inflation, but stresses that more action will be needed to protect those getting into the market.

“Higher interest rates will take some of the wind out of booming housing markets and rapidly rising house prices,” the group wrote in its assessment of Canada’s economic health. “Nevertheless, macro-prudential measures, which were strengthened during 2016, should be tightened further to address economic and financial risks related to the housing market.”

However, the OECD did not limit its call to action strictly to helping those looking to buy, stressing that the current heat in the housing market has direct consequences for those looking to rent.

Do you think governments need to do more to cool the country’s hottest housing markets?

“Some short-term reprieve in house price growth is likely, but speculation-fuelled price increases may resume and the expansion of rent control risks discouraging the supply of new rental housing,” the report stated. “Low rental supply would hamper labour mobility – particularly for the poor and the young – which will make adjustment to globalization more costly and prolonged.”

Despite these concerns, the OECD maintained that growth is projected to remain robust in 2017 and into 2018, despite some expected easing.

“Growth is set to shift from private consumption, housing investment and government spending toward business investment and exports,” the OECD wrote. The report also stressed that a rebound in commodity prices would encourage resumption in resource sector investment.

However, risks remain, particularly in relation to Canada’s trading relationship with the U.S. and a possible NAFTA renegotiation.

“Export growth could be lower if trade barriers in key trading partners increase, for example through renegotiation of the North American Free Trade Agreement or further increases in specific barriers such as anti-subsidy duties recently imposed by the United States on Canadian softwood lumber,” the OECD wrote. 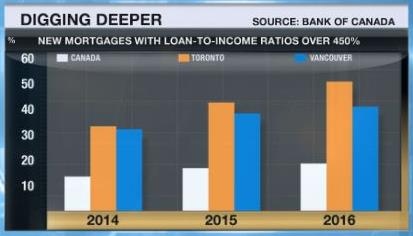