Money and Marketing: Looking back at the decade's most iconic ads

The advertising world mobilized in 2019, focusing on social justice and empowerment against a backdrop of tense social and political discourse.

One marketing strategist said the brands that leaned into that debate are the ones which had the greatest success this past year.

“Advertising needs to be more talked about socially and culturally than ever before,” John Yorke, president of Toronto-based strategy and digital marketing agency Rain43, told BNN Bloomberg in an interview.

“With social media and the opportunities that are out there, there are just a lot of brands who just put up wallpaper. They spend a lot of money and a lot of ink and a lot of pixels, and I just find that they’re still not understanding that – especially with millennials – you have a social [media] movement where people are looking to share information and they want to be with brands they like and can support.”

Yorke shared his thoughts on the best and worst advertising of the year and hinted at what might lie ahead as a new decade beckons.

“The one that stuck out was this empowerment movement in the post-#MeToo world. Whether it was body-shaming or toxic masculinity, I think there was this huge movement, and was very much reflected in the advertising that we saw,” Yorke said.

Gillette: ‘The Best Men Can Be’

“I thought that Gillette taking that stand was a bold one, because if you’re going to offend half your audience, it may be reflected in sales. But if they’re going to be on the right side, then good for them.”

“On the other side of that was Nike’s ‘Crazier’ ad, which was the Serena Williams take, following the Colin Kaepernick ad from the year before, which was called ‘Crazy,’” Yorke said. “The ‘Crazier’ ad was all about women and women’s empowerment, showing multiple female athletes acting in incredibly heroic ways against the backdrop of how women are constantly put down for behaving a certain way. They’re supposedly not allowed to be angry or temperamental or act in the same way as male athletes, who get the benefit of the doubt.”

“I thought those two campaigns were the pillars that held up the entire year of what advertising can be and how it can have a social impact as well as representing the brand, without being kind of two-faced or false. It’s a very delicate line to toe.”

TO THINE OWN BRAND BE TRUE

With social media giving a much louder voice to the masses, Yorke said that celebrities are able to do more with their personal brands.

However, a brand hitching its wagon to a celebrity’s personal brand is a decision that can have pitfalls baked into it.

“It’s dangerous, because if you tie yourself to a celebrity who says or does something – Don Cherry is a perfect example, and the brands that tied themselves to Don’s brand – they’re kind of left out in the cold if something goes haywire,” Yorke said.

Yorke said two of 2019’s best examples of personal branding came from a pair of Canadians.

Drake and the Toronto Raptors 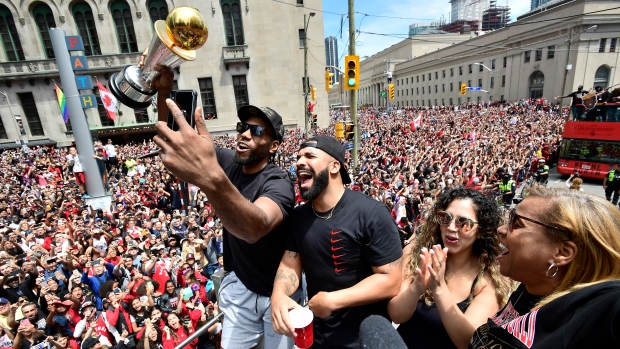 “Drake had a fabulous year this year,” Yorke said. “Every step that he takes seems to hit right, and of course, tying himself to the Raptors brand … Of course they won.”

Yorke also praised the 6ix God’s awareness of when to lay low, believing that there will be plenty more Aubrey Graham to go around in 2020.

“He’s been kinda quiet lately – if you’ve noticed – in the latter half of the year,” Yorke said. “He kind of got over-exposed with the Raptors early in the year and he’s kind of toned it down, but I would see Drake making a huge impact again in 2020 with his new branding with Canopy on the cannabis side and the possibility of releasing more music.”

“He was probably the best personal brand marketer of 2019, and it really seemed like he only worked half the year.”

“This is a brand that keeps winning,” Yorke wrote to BNN Bloomberg in a follow-up email. “Aviator Gin and Ryan Reynolds… This is brilliant.”

The meta-approach to a short TV spot and Reynolds’ awareness to know that he’d be able to carry an ad that largely sees him standing still and smiling awkwardly both worked for Yorke.

The ads that Yorke pointed to as failures in 2019 shared one commonality: A failure to view their ads through a public lens.

ooooh my god LMAOOO who approved this ancestry commercial??? pic.twitter.com/Isy0k4HTMA

The genetics web site rolled out an ad set in the Civil War south where a white man asks a black woman to escape with him to the North. The ad missed the mark, not factoring in the history of slavery in the United States.

“Anything about heritage or immigration is probably a difficult subject to tackle in America today,” Yorke said via email. “And it is even more difficult when it is your business.”

“Ancestry tried to make an ‘inclusive’ ad but it fell, tone deaf. ‘A’ for effort and ‘F’ for execution.”

Peloton: The Gift That Gives Back

“The Peloton ad was widely panned - a fit woman who looks afraid is gifted a Peloton and records her journey,” Yorke said of the mocked and memed misstep by the home exercise brand.

“This is more of the ad’s perception than its intent, but the backlash brought a lot of attention to the $4,000 home bike brand, and that can be good.”

“My question is: Who is putting $4,000 bikes in their living room of their multi-million dollar urban home?”

The real winner of Pelaton’s marketing gaffe: Winnipeg’s Tal Bachman who got another 15 minutes of fame from the ad.

Yorke said the most successful advertisers in 2020 will be the ones that take a lighter touch in a year that promises to be book-ended by American political divisiveness from an impeachment trial and a presidential election on the schedule.

“I think you’re going to have a politically-charged year and you’re going to see a lot of negative advertising. A lot of anger and a lot of vitriol from the political side of things, especially leading into the election,” Yorke said.

“Brands that can actually make people feel good about themselves, brands that can take a lightness to the dark … the big trend I think you’ll see is those brands that take a very, very lighthearted view of the world will succeed, he said.

“So, I think the trend that I’d like to see is to really go back to comedy, and feel-good ads and sentimentality.”