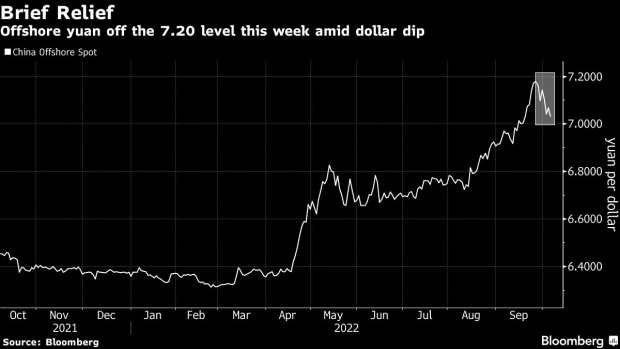 (Bloomberg) -- The offshore yuan’s rally is set to boost the onshore unit once trading resumes after the Golden Week holidays in China, taking the pressure off the central bank to defend the currency.

That’s because the offshore yuan is poised for its biggest weekly gain since May on the back of the dollar’s retreat, as traders bet the Federal Reserve may ease off on its policy tightening. It portends a strong opening for the currency traded in Shanghai after a seventh straight month of losses.

The moves may reduce the need for the People’s Bank of China to support the yuan in the near term, but pressure on the currency is expected to remain as China’s easy monetary policy stance and the rising risk of deflation in the domestic economy, battered by Covid curbs and a flagging property sector, drive outflows.

The offshore yuan’s strength is largely driven by the pullback in the dollar, said Khoon Goh, head of Asia research at Australia & New Zealand Banking Group in Singapore. “The yuan will remain under pressure this year as the dollar dominance is set to continue,” he said, adding that the yuan may trade between 7-7.05 per dollar in the near term before weakening to 7.20 early next year.

Last week, the onshore yuan fell to the lowest since 2008 while the offshore unit depreciated to the weakest in data going back to 2010. The PBOC set a string of stronger-than-expected yuan fixings to cap the losses. It also imposed a risk reserve requirement of 20% on currency forward sales by banks to make it more expensive to short the yuan. That’s after it reduced the foreign-currency reserve requirements for bank deposits.

The fundamental drivers for orderly yuan weakness haven’t changed, according to Citigroup Inc. The expected gradual normalization of China’s trade balance with lower export growth and higher import growth should weaken the yuan against a basket of its trading partners’ currencies, the firm’s strategists Gaurav Garg and Philip Yin wrote in a note.