Demand is heading higher but oil is getting sucked into equities downward spiral: Robert Yawger

Oil fell to the lowest in nearly a week amid a broader market selloff while additional coronavirus outbreaks in China dampened crude’s demand outlook.

West Texas Intermediate settled below $110 a barrel after earlier rising to above $115. Beijing reported more new cases on Tuesday while Tianjin’s Binhai area put another area under lockdown. The flareups underscore the challenges China faces in pursing Covid Zero policy, which have already taken an enormous economic toll. The decline also came amid a wider market selloff, with US stocks poised for the biggest daily drop in almost two years.

“The market is extremely volatile so any little news or stock market sell off” can cause outsized swings in crude markets, said Dennis Kissler, Senior Vice President of Trading, BOK Financial. “The fundamentals remain bullish.” 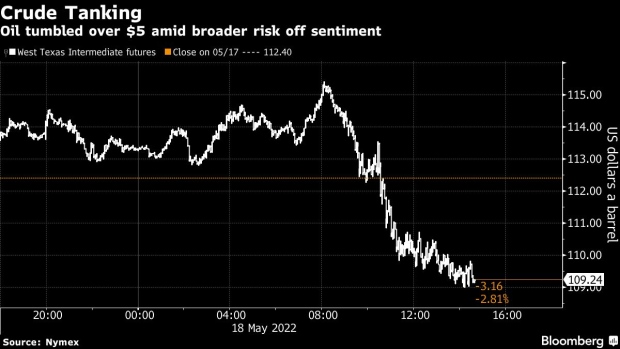 US gasoline prices, both futures contracts and at the pump -- have touched unprecedented levels despite President Joe Biden ordering a vast release of crude from strategic reserves. Gasoline inventories have already dropped by about three per cent in 2022, and stand below the five-year seasonal average. With the summer driving season about to begin, there’s plenty of pain at the pump. Retail gasoline prices have risen above US$4 a gallon in all US states for the first time, according to data from auto club AAA.

Earlier in the session, the spread between WTI and Brent shrank to the narrowest in seven months to $1.72, pointing to strength in the US benchmark. The spread has tightened as fuel demand has risen during the US summer driving season.

Additionally, the European Union offered member states as much as US$2.1 billion to ease the shock of losing access to Russian oil, a move it hopes will help clinch a deal to slap energy sanctions on Moscow. The dollar rose making commodities prices in the currency less attractive.

“Hungary ultimately wants concessions and Europe is working on it,” said Amrita Sen, research director at Energy Aspects, on Bloomberg Television. “Exactly how that pans out remains to be seen. But we believe that an embargo is in the cards.”