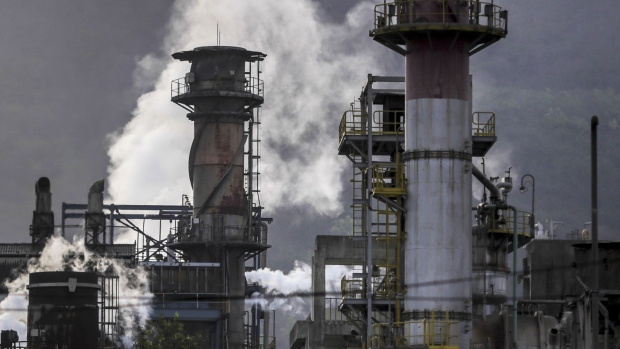 Emissions rise from chimneys at the Oil and Natural Gas Corporation Ltd. (ONGC) Uran plant in Uran, Maharashtra, India, on Monday, May 27, 2019. ONGC is scheduled to report earnings on May 30. Photographer: Dhiraj Singh/Bloomberg , Bloomberg

Oil rose near US$62 a barrel with investment banks and traders predicting the market’s rally can go further.

Futures in New York gained 0.8 per cent on Tuesday and are up almost 30 per cent so far this year. The market is heading toward what could be the tightest quarter since at least 2000, according to Morgan Stanley, while Socar Trading SA sees global benchmark Brent hitting $80 a barrel this year as the glut of inventories built up during the COVID-19 pandemic is drained by the summer.

The loss of oil output after the big freeze in the U.S. will also help the market firm as much of the world emerges from lockdowns, according to Trafigura Group. Fuel flows from Asia to the U.S. have gained after the cold blast left some of the biggest refineries facing a slow and messy restart.

Oil has surged this year after Saudi Arabia pledged to unilaterally cut 1 million barrels a day in February and March, with Goldman Sachs Group Inc. predicting the rally will accelerate as demand outpaces global supply. Russia and Riyadh, however, will next week once again head into an OPEC+ meeting with differing opinions about adding more crude to the market.

“The freeze in the U.S. has proved supportive as production was cut,” said Hans van Cleef, senior energy economist at ABN Amro. “We still expect that Russia will push for a significant rise in production,” which could soon weigh on prices, he said.

The global oil market has been under-supplied by 2.8 million barrels a day so far this year, Morgan Stanley said in a note, boosting its Brent forecast for the third quarter to US$70 a barrel. Goldman has raised its estimate for the same period to US$75, while Socar said US$100 was possible in the next 18 to 24 months.

--With assistance from David Stringer.