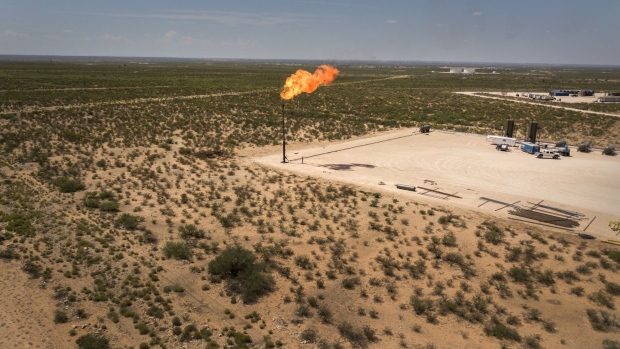 A gas flare is seen in this aerial photograph taken above a field near Mentone, Texas, U.S., on Saturday, Aug. 31, 2019. Natural gas futures headed for the longest streak of declines in more than seven years as U.S. shale production outruns demand and inflates stockpiles. Photographer: Bronte Wittpenn/Bloomberg , Bloomberg

(Bloomberg) -- The global oil and gas industry has slashed at least $31 billion from investment budgets after crude’s epic price crash this month, and more cuts are likely to come.

Producers are quickly switching gears to survive a flood of oil coming into the market as Saudi Arabia and Russia open the spigots to fight for global market share. Meanwhile, the Covid-19 pandemic is having a devastating impact on demand.

Shale explorers in the U.S. and oil-sands producers in Canada -- which were already in dire straits before the price collapse -- have been the quickest to announce belt-tightening efforts.

But giants like Saudi Arabian Oil Co., France’s Total SA and Russia’s Lukoil PJSC have also joined in, while Exxon Mobil Corp. and BP Plc have hinted that reductions in capital expenditures are likely to come. In Asia, Latin America and other Middle East countries, where most oil companies are state-run, it’s not yet so clear how producers will adapt to cope with the downturn.

Here’s a table with spending cuts that have been announced so far: