Brent closed at the highest in nearly three years amid signs the crude market is rapidly tightening from a global energy crunch.

The global benchmark crude surged 1.8 per cent on Monday, but met some resistance as it neared the key, psychological US$80-a-barrel level. Its U.S. counterpart rose 2 per cent to close above US$75 a barrel for the first time since July. Both benchmarks are set to continue climbing as supply struggles to catch up with fast-rising demand, according to Trafigura Group’s co-head of oil trading Ben Luckock. His remarks came as Goldman Sachs Group Inc. said Brent could hit US$90 by year-end as the market is in a bigger deficit than many realize.

Brent failed to break US$80 because some speculators were taking profits, said Bob Yawger, director of the futures division at Mizuho Securities. “We should look for the market to reload and give the US$80 level another shot in coming days.” 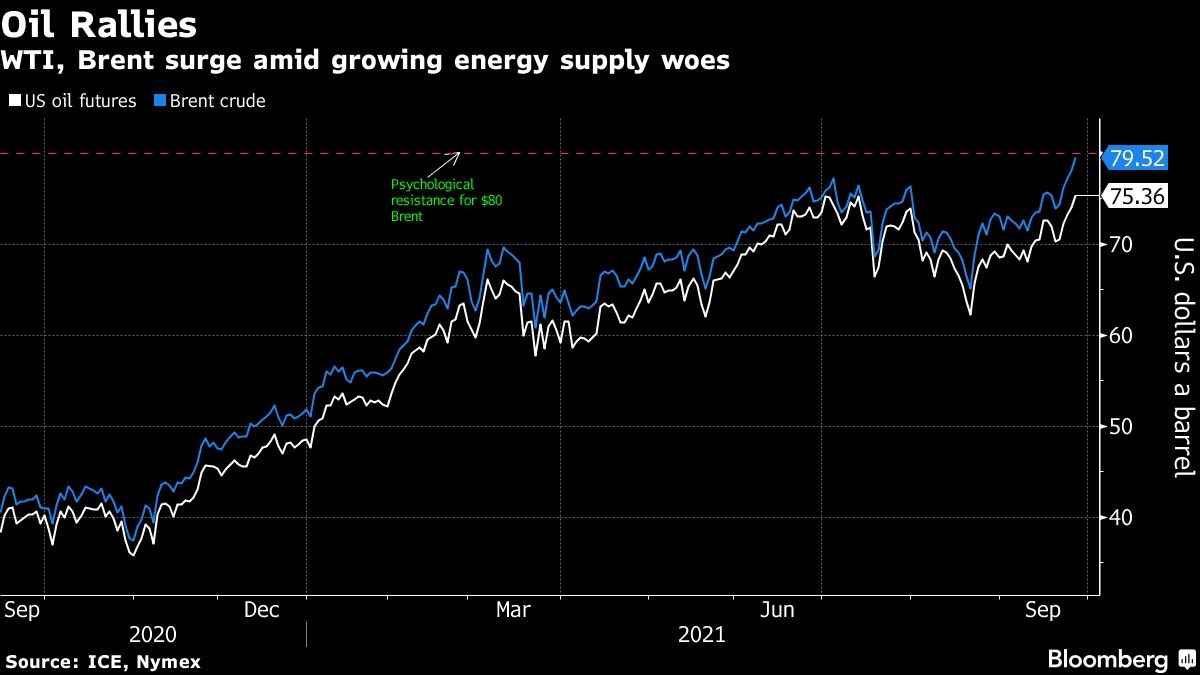 Crude is rallying on signs that inventories globally are falling sharply, with demand heating up ahead of winter and OPEC+ only slowly adding barrels back to the market. As traders eye the prospect of large market deficits, Trafigura said longer-dated oil prices remain cheap at around US$70 a barrel. So-called timespreads, which gauge market strength, have rallied sharply in recent weeks in another sign that traders are positive about the outlook.

“Observable inventory draws are the largest on record,” Goldman Sachs analysts including Damien Courvalin wrote in a note to clients. “This deficit will not be reversed in coming months, in our view, as its scale will overwhelm both the willingness and ability of OPEC+ to ramp up.”

WTI’s front-month contract traded at the biggest premium to its second-month in nearly two months.

Meanwhile, OPEC+ is scheduled to meet on Oct. 4. to review its output policy. Internal documents from the group have already highlighted the risk of the natural gas crisis ramping up demand. World oil consumption could be boosted by an additional 370,000 barrels a day -- roughly 6 per cent of expected growth -- if gas prices stay high for an extended period, according to the group.

U.S. natural gas futures rose for a third straight session on Monday as inventory levels stayed low ahead of the heating season.