Conditions are as strong as they’ve ever been for O&G companies like ours: Enerplus CEO

West Texas Intermediate edged lower to settle near US$81 a barrel after floundering in a US$3 range on Thursday. Crude was pressured by stock market fluctuations after equities plunged at the open as Federal Reserve officials doubled down on future rate hikes.

Discussions among members of the Organization of Petroleum Exporting Countries and its allies about lowering oil output when it meets next week provided some support for futures amid general risk-off sentiment among investors.

While crude is on track for a weekly gain, futures are still heading for the first quarterly decline in more than two years as fears of a potential recession hang over the market. The dollar has spiked this month and is trading near a record, making commodities priced in the US currency less attractive to investors.

“It’s very much a macro story these days because we’re not getting real measurable changes in either supply or demand dynamics at the moment,” said John Kilduff, founding partner at Again Capital. “It’s really about what the overall market sentiment is in terms of what the central banks are going to be doing to curtail this inflation surge.” 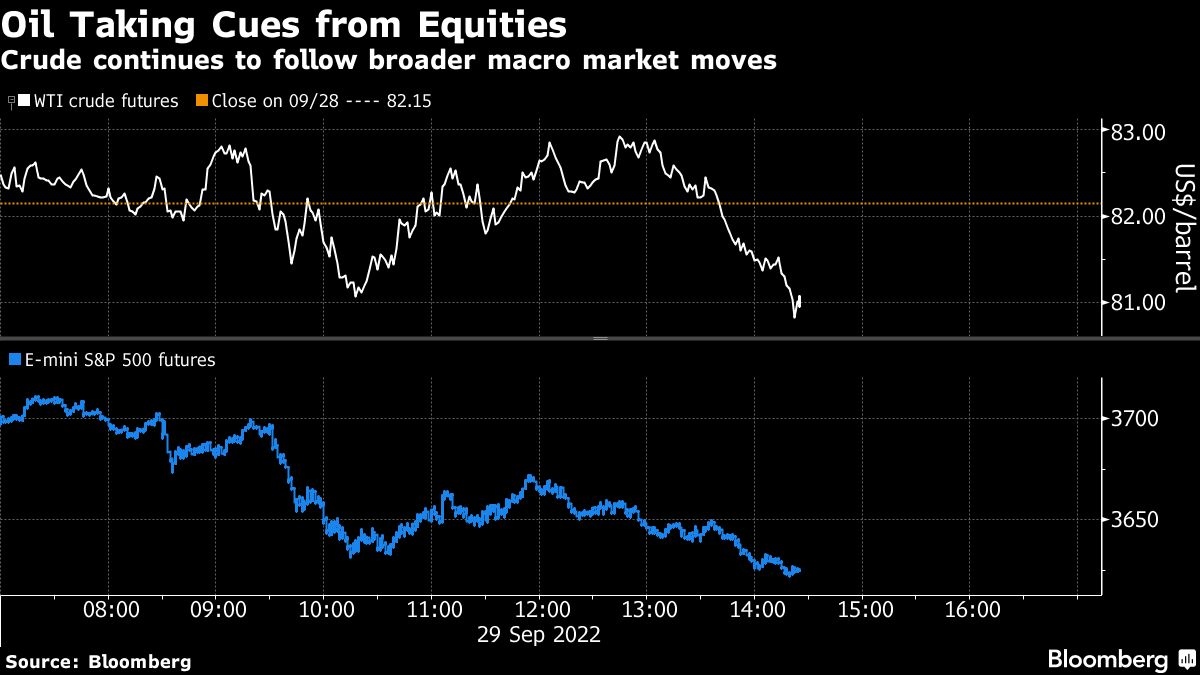 At the same time, the market’s structure has firmed in recent days, indicating tighter supplies.

The European Union announced a new round of sanctions against Russia that would ban European companies from shipping the OPEC+ producer’s oil to third countries above an internationally set price cap. Tensions have escalated after natural gas pipelines were damaged in suspected sabotage. A fourth leak was discovered Thursday on Nord Stream natural gas pipelines in the Baltic Sea.

In Europe, premiums for diesel over crude extended a recent bout of strength. France has asked traders to return millions of barrels of the fuel that were released as part of a globally coordinated stock draw earlier in the year. The country also continues to grapple with outages at some of its biggest refineries.

Diesel strength is rippling through US markets as well. Premiums for physical barrels of jet fuel traded in New York and Houston are soaring against futures. U.S. refiners have scaled back jet fuel production to prioritize diesel output as a deadline to ban Russian fuels in Europe approaches.