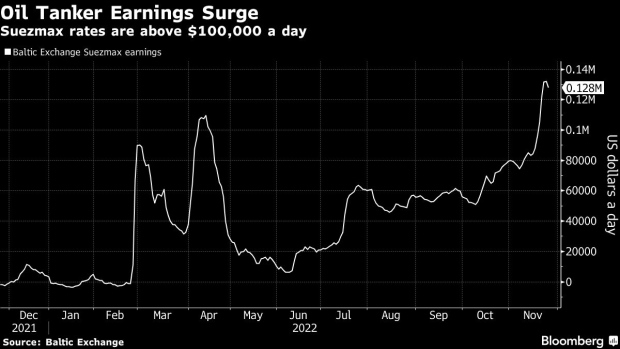 In the oil-tanker market, day rates for delayed vessels -- think taxis waiting with the meter on -- have now reached around the $100,000 mark, according to traders and shipbrokers.

Those waiting fees are called demurrage, and it’s not unheard of in some locations for the delays to have reached seven to ten days, eroding the profit on physical oil trades.

Such hold ups aren’t out of the ordinary when factors like bad weather in the North Sea make loadings too risky or Covid controls slow logistics at Chinese ports.

Recently, two vessels that were due to load Forties oil at a terminal on the coast of Scotland were delayed by almost a week, according to people with knowledge of the matter. Another, filled with crude from Kazakhstan, has been waiting near the Netherlands since Nov. 10.

The global oil tanker fleet has been increasingly stretched by Europe’s looming embargo on Russian oil, forcing cargoes to sail greater distances. That has also made it hard to find replacement ships at short notice, as demand is effectively lifted by the longer voyages.