Oil posted its biggest gain in over a week in choppy trade as traders weighed the prospect of more rate hikes against persistently tight supplies.

West Texas Intermediate futures closed above US$117 a barrel after rebounding from a session low of US$112.31. Brent ended just under US$120. This week, the Federal Reserve raised interest rates 75 basis points as it sought to combat surging inflation. The US central bank signaled a willingness to accept a recession and a rise in unemployment in its resolve to contain elevated inflation.

“There is a churn to the market, today,” said John Kilduff, a partner at hedge fund Again Capital in New York. “The continued supply concerns remain supportive, but the economic data are moves by the Fed and other central banks is holding back further gains.” 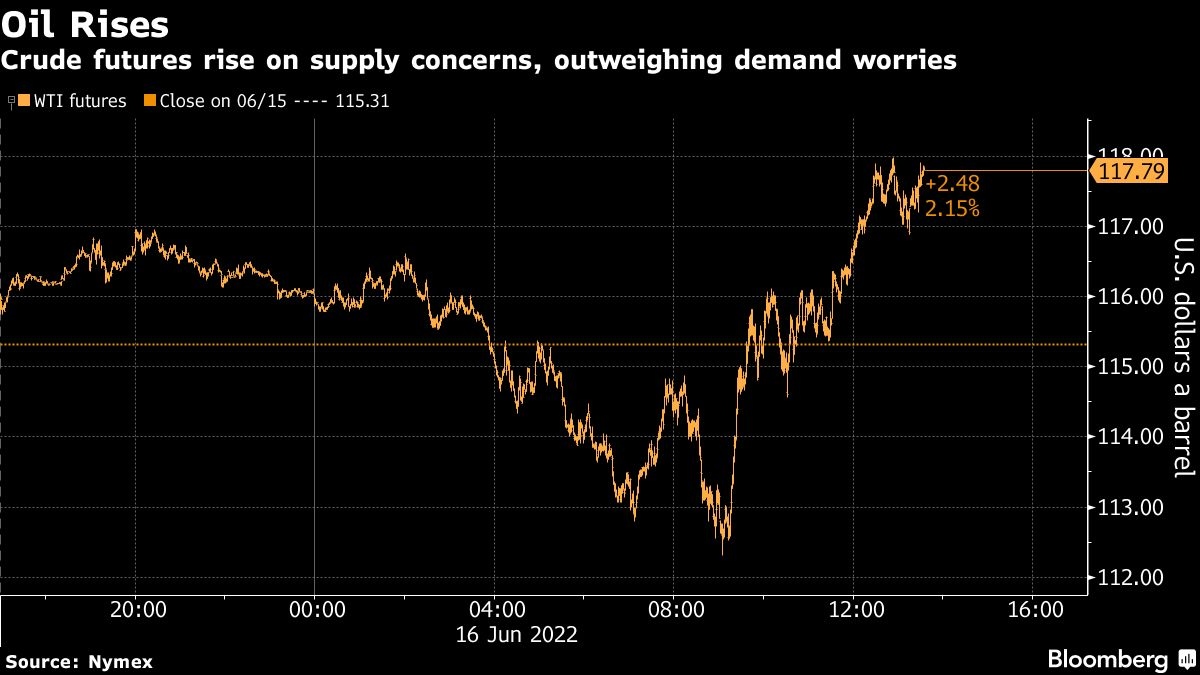 Traders were covering short positions, dealers said, adding to the swings in prices.

Despite the increasing risks for the economy, crude is up more than 50 per cent this year following a tightening of energy markets after Russia’s invasion of Ukraine. Global supply will struggle to meet rising demand in 2023, the International Energy Agency said in a monthly report on Wednesday. Goldman Sachs Group Inc. said on Thursday that the market has tightened quicker than they were expecting.

The war in Ukraine has fanned inflation worldwide, with US retail gasoline recently topping US$5 a gallon. That has exacerbated inflation that is running at the hottest rate in 40 years, and has forced central banks to embark on an aggressive rate tightening path.

“The rate hikes coming up triggered quite some profit taking on long positions,” said Hans van Cleef, senior energy economist at ABN Amro. “At the same time, downside was limited as the tight market conditions added a floor to the prices.”

The surge in prices is hitting consumers across the globe. Citigroup Inc. sees buyers of commodities paying producers about US$5.2 trillion more in 2022 than they did three years ago. European airline Wizz Air said Thursday that it will reverse a post-pandemic policy of not hedging its fuel bill as oil prices surge.

The slump in crude prices in recent days has been steep and WTI is trading about US$8 below its high for the week. That has also shown up in the structure of the futures curve where time spreads have weakened substantially. The US benchmark’s prompt spread -- a gauge of how tight the market is -- was trading at its weakest level in about a month on Thursday.