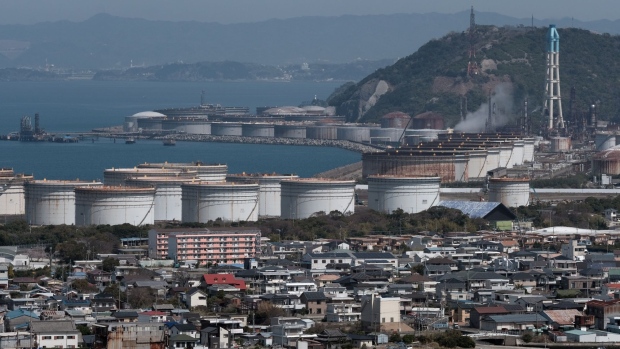 An Eneos Holdings Inc. oil refinery in Arida, Wakayama Prefecture, Japan, on Wednesday, March 30, 2022. Japan’s biggest refiner Eneos will terminate operations at the 127,500 barrel-a-day plant in Arida in October 2023 due to falling domestic demand and the shift away from fossil fuels. Photographer: Sochiro Koriyama/Bloomberg , Bloomberg

(Bloomberg) -- A Japanese oil refiner is planning to sell a climate-friendly bond that combines elements of two existing ESG debt structures, in what would be a first in the nation.

Eneos Holdings Inc. said Friday that it intends to sell 100 billion yen ($777 million) of transition-linked notes, which are a mix of so-called transition bonds and sustainability-linked notes.

Under this structure, Eneos would make donations or have to take other steps for the environment if it doesn’t meet carbon-dioxide reduction targets. One of the goals is to decrease its CO2 emissions by 46% by the end of fiscal 2030 compared with 2013.

Transition bonds are one alternative for companies in high-emission industries such as shipping and power generation to raise cash for projects that can’t be described as “green” but which still contribute to reducing emission. By contrast, for sustainability-linked notes the use of proceeds aren’t necessarily specified but borrowers designate ESG-related targets and pledges to pay a penalty if they fall short.

Not all investors favor less stringent terms in debt structures like transition bonds, while others maintain that financing that contributes to reducing emissions should be embraced. The ESG debt market has boomed in recent years with cumulative issuance exceeding trillions of dollars.

Transition bonds have failed to take off globally, but have gained in popularity in Japan after authorities there released road maps for issuers who wish to offer such debt.

Only about 10 companies have sold even plain transition bonds so far globally, and at least four of those have been from Japan including Japan Airlines Co. and Tokyo Gas Co.