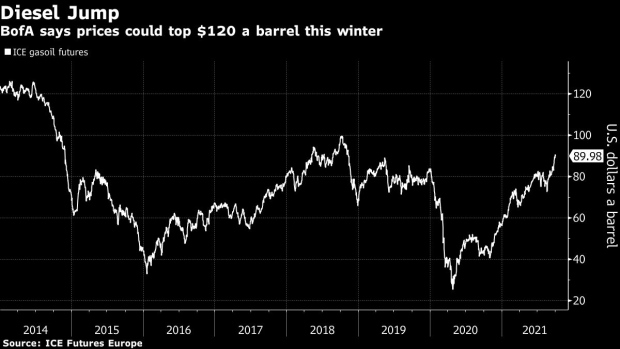 Storage tanks at a Colonial Pipeline Inc. facility in Avenel, New Jersey, U.S., on Wednesday, May 12, 2021. Motorists across a broad swath of the U.S. East Coast and South are struggling to find gasoline and diesel as filling stations run dry amid the unprecedented pipeline disruption caused by a criminal hack. , Bloomberg

(Bloomberg) -- The global energy crunch could help propel oil prices above $100 a barrel for the first time since 2014 and spur a global economic crisis, according to Bank of America.

Natural gas prices have already surged to almost double that level in oil equivalent terms, and BofA says a spike in demand for diesel could push crude into similar territory. With monetary and fiscal policy stretched to the limit and energy costs rising as a share of economic output, higher oil prices could in turn create a macro crisis, the bank said Friday in a note.

The boost to crude would be driven by three factors: gas-to-oil switching as a result of high gas prices, a jump in crude consumption over a cold winter and higher aviation demand as the U.S. reopens its borders.

“If all these factors come together, oil prices could spike and lead to a second round of inflationary pressures around the world,” analysts including Francisco Blanch wrote in the note. “Put differently, we may just be one storm away from the next macro hurricane.”

Diesel prices could climb above $120 a barrel, the bank said, with stockpiles falling as refiners prioritized the production of gasoline in recent months. Other oil-based fuels used in heating are already seeing an uplift, with U.S. propane prices at their highest since 2014.

As well as the cooler weather, BofA also said that underinvestment in commodities due to poor returns is also set to fuel higher oil prices in the longer-term.

“A multiyear run up in crude oil prices is now in the cards,” the bank said.