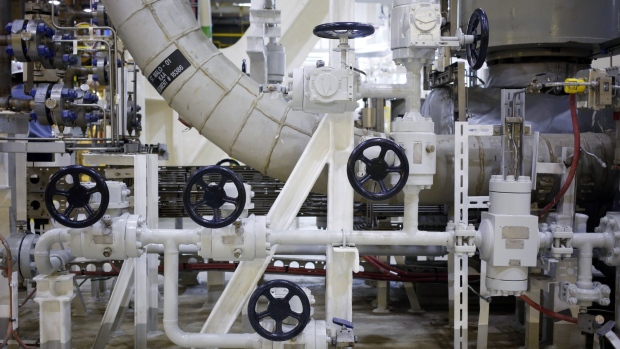 Pipes are seen aboard the Chevron Corp. Jack/St. Malo deepwater oil platform in the Gulf of Mexico off the coast of Louisiana, U.S., on Friday, May 18, 2018. Photographer: Luke Sharrett/Bloomberg , Bloomberg

(Bloomberg) -- Shell is ramping up three of its oil and gas fields in the Gulf of Mexico after completing repairs to a station in Fourchon, Louisiana, that allowed key pipes to resume flows.

Multiple offshore platforms were shut Thursday after a leak at Louisiana booster station halted Shell Plc’s Amberjack and Mars pipelines. Combined, these pipe systems can transport as much as 500,000 barrels of oil a day from the Gulf to the coast.

Shell said late Friday the Mars pipeline has restarted and is returning to normal service after completing fixes to the Fourchon booster station. The company is also ramping up production at its Mars, Ursa and Olympus fields, a spokesperson said. Amberjack, which is jointly owned by Chevron, resumed operations earlier Friday and flows are going back to normal, she added.

Earlier, Chevron said it resumed production at its Jack/St. Malo, Tahiti and Big Foot platforms after the Amberjack pipe restarted. Equinor ASA’s Titan platform and some of Murphy Oil Corp.’s fields were among other offshore assets that halted operations when Mars and Amberjack pipes stopped service, the companies said.

The shut-ins come at a time when global energy supplies are exceedingly tight. While US crude inventories have been cushioned by the government’s tapping of emergency oil reserves, stocks nevertheless remain below the five-year average. Supplies could tighten further, with the International Energy Agency forecasting that oil demand will accelerate this year.

Prices for Mars Blend crude, a regional sour crude benchmark, strengthened Thursday before easing Friday. At the same time, Gulf of Mexico dry-gas production fell about 10%, the most since January, according BloombergNEF estimates based on pipeline flows.

(Adds restart of Mars pipe and 3 fields in third paragraph. A previous version corrected the Energy Aspects production impact estimate in the fourth paragraph to “barrels” from “barrels a day.”)