Oil fell in another volatile session with the first identified U.S. case of omicron jolting markets ahead of OPEC’s meeting with partners tomorrow to discuss output production.

West Texas Intermediate closed down 1 per cent, erasing earlier gains of as much as 5 per cent. The omicron variant continued to worry investors with the first case detected in California and a doubling of South Africa’s COVID-19 cases from Tuesday. Meanwhile, Federal Reserve Chair Jerome Powell reiterated that the bank must remain vigilant against inflation, which can be bearish for commodities if it takes steps to slow the pace of economic growth.

“It was inevitable that Omicron would make it to the US, but when you combine how quickly it appears to be spreading across South Africa, energy traders are getting more concerned about the short-term outlook,” said Ed Moya, senior market analyst at Oanda Corp. “If omicron is much more transmissible we could see large parts of the country enter lockdown mode.”

The Organization of Petroleum Exporting Countries and its allies are meeting this week to consider its output policy amidst concerns that the new variant could slow global oil demand. 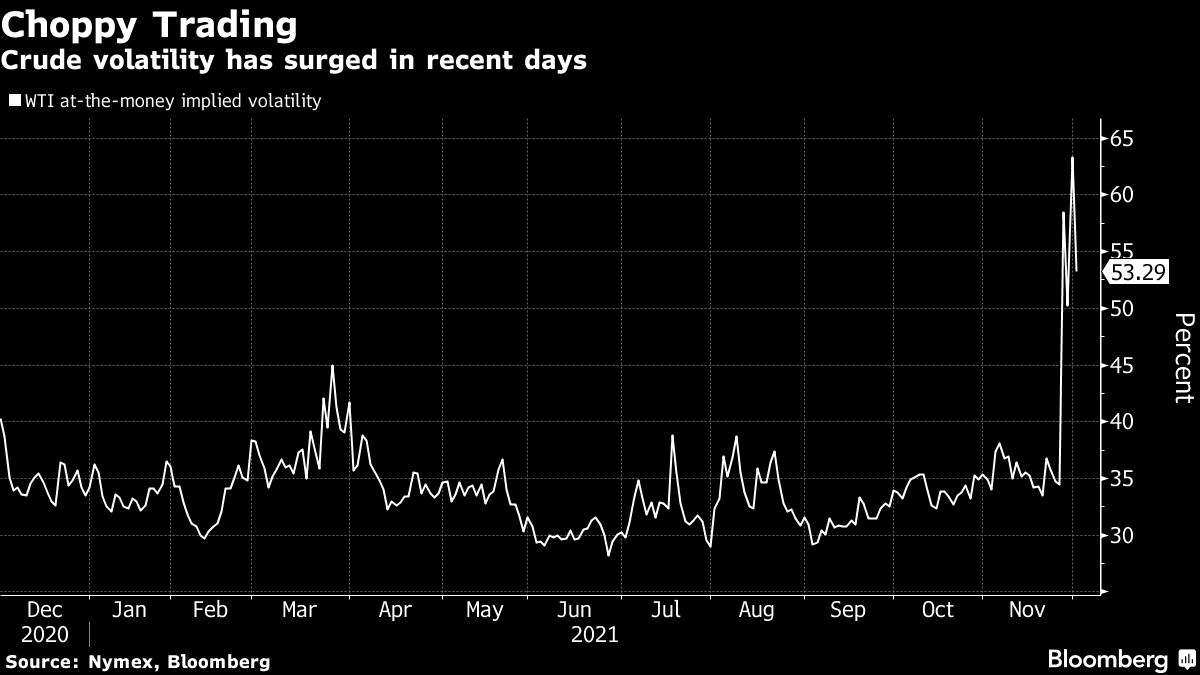 Some analysts expect OPEC+ to pause supply hikes in light of crude’s recent declines and worries that the omicron variant may dampen oil demand. The U.S. frustrated OPEC+ last week by announcing a release from its strategic reserves.

There are indications that crude’s fundamentals have softened, reflected in a weakening price structure along the curve. Yet Goldman Sachs Group Inc. said Tuesday that oil prices have now “far overshot“ the likely impact of the new virus variant.

OPEC+ has “erred on the side of caution since it began slowly boosting supplies,” said Stephen Brennock, an analyst at PVM Oil Associates. A potential decision to shelve January’s planned increase and keep quotas flat “comports with its cautious approach.”

In Washington, Powell said for the second time in two days that the bank should consider speeding up how quickly they withdraw policy support. A looming end to the taper could lead to an increase in interest rates to tamp economic growth and subsequently slow the recovery in commodity consumption.

The battery of recent headlines and uncertainty triggered by the new variant has caused oil’s volatility to soar. WTI closed 13 per cent lower on Friday before climbing on Monday and slumping again Tuesday. Gauges of swings in both WTI and Brent are at their highest since May 2020.

Although oil remains in backwardation -- a bullish structure with near-term contracts trading above later-dated ones -- differentials have narrowed. Brent’s prompt spread was 30 cents a barrel, down from US$1.20 a week ago.