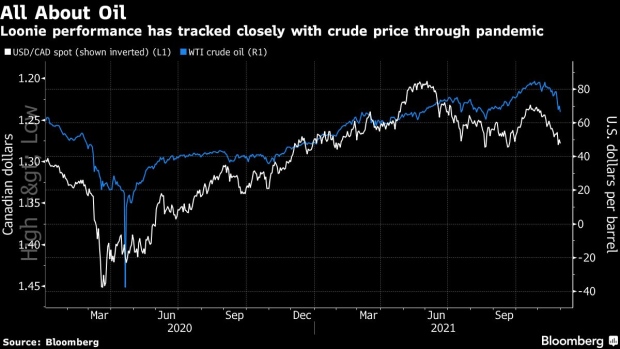 (Bloomberg) -- Not even booming economies and the specter of rising interest rates are rescuing some of the world’s major commodity-linked currencies from a deepening slump.

Take the Canadian dollar, which is heavily tied to the price of oil. It slid nearly 0.4% on Tuesday, despite a report showing that the economy grew 5.4% in the third quarter, a stronger-than-expected pace that would appear to bolster the case for higher rates. The decline caps the steepest monthly drop for the currency since March 2020, with a slide of more than 3% against the U.S. dollar in November.

Bipan Rai, head of foreign exchange strategy at CIBC, said that because money markets are already priced for a hawkish shift by the Bank of Canada next year, they’re “more sensitive to negative surprises than positive surprises like we saw today.”

It’s not just the loonie that’s being dragged down by commodity prices: Other raw-material exporters like Norway, New Zealand and Australia have seen their currencies put up their worst performances since at least the start of the pandemic, despite having central banks that are poised to begin raising interest rates in 2022. The Russian ruble is also among the biggest decliners this month.

The drop reflects the broad decline in commodity prices, spurred in part by fears that a new coronavirus variant could hamper the global economic recovery. The Bloomberg Commodity Index has fallen over 7% this month, its largest decline since March 2020.