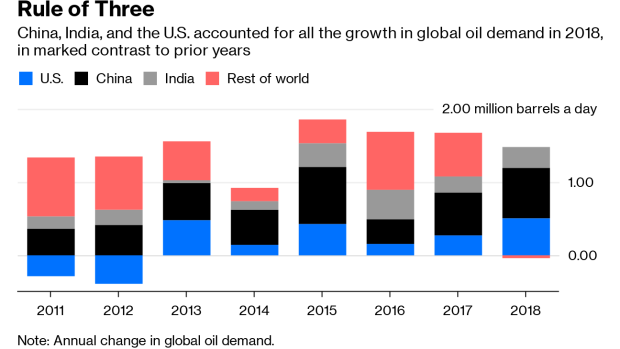 CULVER CITY, CA - APRIL 25: Oil rigs extract petroleum as the price of crude oil rises to nearly $120 per barrel, prompting oil companies to reopen numerous wells across the nation that were considered tapped out and unprofitable decades ago when oil sold for one-fifth the price or less, on April 25, 2008 in the Los Angeles area community of Culver City, California. Many of the old unprofitable wells, known as "stripper wells", are located in urban areas where home owners are often outraged by the noise, smell, and possible environmental hazards associated with living so close to renewed oil drilling. Since homeowners usually do not own the mineral rights under their land, oil firms can drill at an angle to go under homes regardless of the desires of residents. Using expensive new technology and drilling techniques, California producers have reversed a long decline of about 5 percent annually with an increased crude flow of about 2 1/2 million barrels in 2007 for the first time in years. (Photo by David McNew/Getty Images) , Photographer: David McNew/Getty Images North America

(Bloomberg Opinion) -- Oil has a demand problem. You can see it, most obviously, in headline crude oil prices, which slumped again Wednesday morning. You can see it in Asian refining margins and physical premia. You can see it in Saudi Arabia’s efforts to maintain supply cuts, rapidly turning into an oily version of Dylan’s Never Ending Tour.

You can also see it in some historical figures in BP Plc’s Statistical Review of World Energy, the annual data bible that dropped on Tuesday. Looking at numbers for 2018 and prior years might seem superfluous to judging what’s happening in 2019. Moreover, the headline growth figure for 2018 of 1.4 million barrels a day, or 1.5%, is pretty robust. Its fragility lies beneath.

That just three countries can pull global demand along may seem comforting to oil bulls. But it’s a narrow group to rely on, especially when two members are engaged in a trade war. Manufacturing indicators have weakened for all three in recent months, and vehicle sales have been particularly bad in India and China. Meanwhile, the U.S., which reports the most timely and transparent data on oil flows, reported another increase in inventories Wednesday – and that follows an extraordinary build-up in stocks of crude and refined products in May.

In light of all that, it should worry oil bulls that demand growth across the rest of the world altogether vanished in 2018 – especially as global economic growth is forecast to be slower this year, partly because of that trade war, and the tailwind of exceptionally low fuel prices that prevailed in 2016 and much of 2017 is behind us.

The other important aspect revealed in the Statistical Review concerns the types of oil being consumed. BP highlighted the increased importance of lighter liquids such as naphtha and ethane related to petrochemicals in the overall mix. You can see this in the chart below, where “other light distillates” and “other” liquids accounted for 54% of net growth in demand last year. Notice, too, what happened to gasoline and diesel.

Naphtha prices have weakened considerably in Asia, along with gasoline. This is partly a function of Chinese refiners staying busy and taking advantage of looser export controls to dump excess products elsewhere in the region (something energy economist Philip Verleger has highlighted in several recent reports centered on the collapse in Singapore refining margins). Naphtha competes with natural gas liquids, and supply of the latter has also surged, largely as a by-product of the shale boom. The U.S., accounting for almost 40% of production, is the OPEC of natural gas liquids – apart from the crucial distinction that it shows no inclination to cut supply despite prices having slumped to their lowest level in more than two years:

The thing about excess supply, though, is that it also suggests deficient demand. Coming amid weaker economic data, reliance on petrochemical demand represents a big risk for oil markets this year. It’s worth looking again at the BP data, which show that output from refineries actually increased by less than a million barrels a day in 2018, which also reflects the rising share of lighter liquids. Crude oil demand is ultimately a function of what refiners want to buy and process – they’re the direct customers, not you and me.

As I wrote here, after a relatively weak first half, oil bulls’ hopes for 2019 rest largely on the usual seasonal upswing in refining runs in the third quarter. Yet the economic, inventory, and ultimately pricing indicators put that at risk. The International Energy Agency has been slow to cut demand forecasts, finally trimming them last month by a mere 90,000 barrels a day to 1.3 million a day. The IEA will update those later this week, and it will be surprising indeed if another cut isn’t forthcoming. After all, we now know the warning signs have been there since at least last year.