The financial turmoil crushing industrial-metals equities has a silver lining: lower energy prices can be a boon to miners.

Mining companies are “big energy consumers and to the extent their costs are lower, that helps their margins,” Harquail said in a phone interview. “If you look at the typical open pit, just the energy is about 25 per cent of the cost of moving rock and crushing rock.”

How positive the effects will be varies by company depending on the type of metal they produce and how they mine it. “The more downstream processing is involved to the refined commodity, the more the oil impact is diluted,” Colin Hamilton, an analyst at BMO Capital Markets, said in a research note.

For gold companies, already benefiting from prices trading near a seven-year high, the likelihood of a positive impact is higher. For a company with cash costs of, say, US$800 an ounce, roughly US$200 would typically be energy costs, Harquail said. With energy prices close to halved, that’s a savings of US$100 an ounce, he said.

Lower oil prices “will have no negative impact, and the positive impacts on pricing, on our operating costs, are variable, given the different weighting of fuel (diesel, gas and heavy fuel) usage across our operations,” a Barrick Gold Corp. spokesman said by phone. 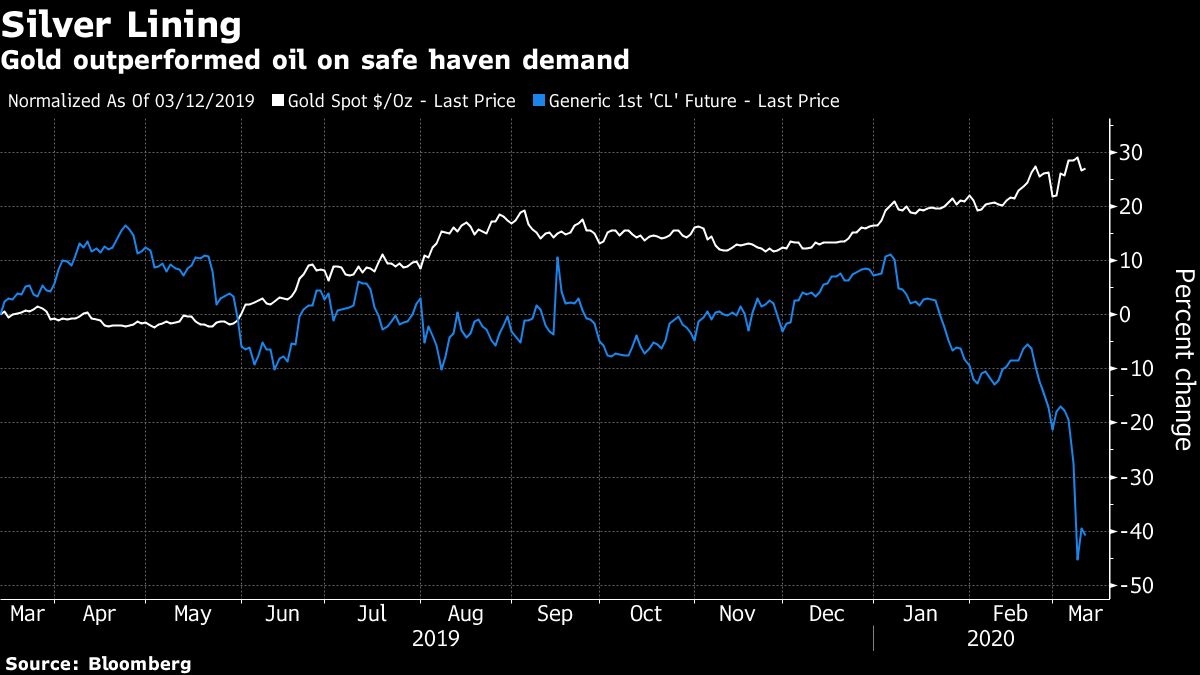 For base-metals miners, the benefits are less cut and dry. Falling oil triggered by oversupply, now a key catalyst because of the Saudi-Russian price war, may provide a clear positive to mining companies. But when lower fuel prices are caused by the prospect of slowing economic growth -- as is the case with the coronavirus outbreak -- the benefits to miners of cheaper energy may be outweighed by the hit they take from lower prices for their own products.

Copper futures have fallen 2.3% so far this week in New York, while an index of base-metal miners has plunged 9.1%.

The outlook is more complicated for diversified miners that also have energy assets, such as Vancouver-based Teck Resources Ltd.

“We assess commodity price changes on an ongoing basis to fully understand the potential impacts or benefits to our business,” Chris Stannell, a Teck spokesman, said by email. “The current volatility created by the level of uncertainty in the market makes it more challenging to evaluate.”

The use of hedges to protect against price swings makes the picture even harder to gauge.

“Anyone who uses lots of fuel will be seeing lower costs, depending on how much fuel price they hedged,” B2Gold Corp. CEO Clive Johnson said by phone.

Agnico Eagle Mines Ltd. hedges 77% of its diesel exposure at its gold mines in the northern Canadian territory of Nunavut, Ben Lam, the miner’s vice president of treasury, said by phone. The company is now looking at ways to capture more of the price benefits of the current move down.

Meanwhile, the Toronto-based company is benefiting from weaker currencies in the countries where it mines, including Canada and Mexico. For example, for every 1% gain in the U.S. dollar against its Canadian counterpart, Agnico’s cash costs fall $6 an ounce, the company said. Agnico hedges 16% of its Canadian dollar exposure and 8% of its Mexican peso exposure.

Ultimately, the full impact of lower prices on miners will depend how long they last.

“A one-day drop is not going to have a material benefit for miners like us, said Omar Jabara, a spokesman for Newmont Corp., the world’s largest gold producer. “It would need to be sustained lower prices before we saw a material benefit to our bottom line.”