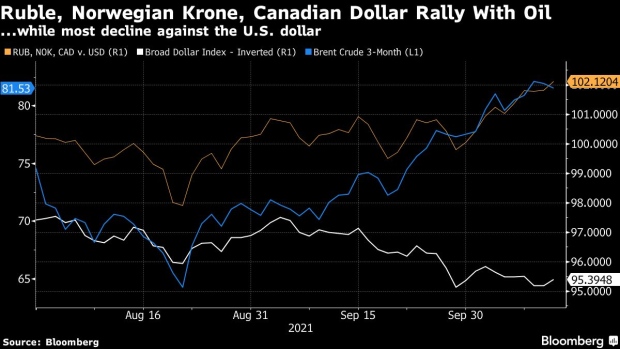 (Bloomberg) -- The Canadian dollar, Norwegian krone, and Russian ruble have been among the biggest beneficiaries of the sprint up in oil prices since August. The good news for investors betting on these currencies is that their sensitivity to the price of crude increases when oil trades between $80 and $100 per barrel.

The major crude exporters have shrugged off gains in the Bloomberg Dollar Spot Index, and their currencies have appreciated an average of 3% versus the greenback since the 3-month Brent contract broke above $70 per barrel.

Based on a Bloomberg study that controls for the effect of global stock prices and yields, the ruble appreciates by 2.3% when Brent moves from $80 to $100 per barrel, compared with a 1.6% gain when oil rose from $69 to $82. The sensitivity of the krone and Canadian dollar also increased, and the currencies appreciated by 2% and 1.3%, respectively, when oil moved in the higher range.

The results are surprising, given that Russia and Norway use their sovereign wealth funds and central bank interventions to curb currency appreciation when oil revenues are elevated. Furthermore, each marginal oil dollar spent onshore should have less of an impact on the real economy and on yields.

Still, the U.S. oil balance has improved markedly since the last occasions when oil prices were in the $80-$100 range. That may mitigate the positive impact of oil prices on these currencies against the dollar -- although not against non-dollar rivals. On top of that, the recent run-up in oil prices has increased concerns about stagflation, and a larger risk-aversion shock would boost the dollar against all assets.