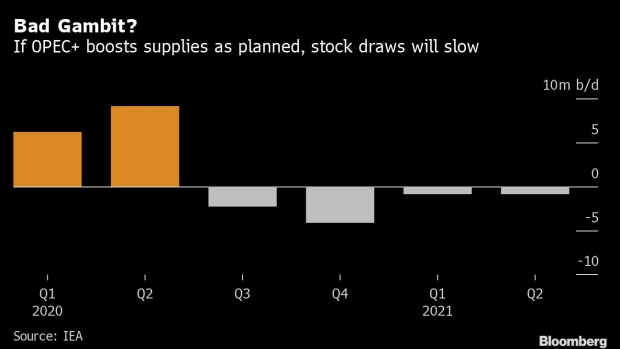 (Bloomberg) -- Oil traded near $41 as hopes for a last-ditch pre-election deal to inject more stimulus into the U.S.’s pandemic-ravaged economy were countered by accelerating virus cases.

Futures in New York were little changed, after declining 0.2% on Friday. The U.S. recorded its fifth day of new infections above 50,000, while Italy’s cases swelled to a daily record. Meanwhile, House Speaker Nancy Pelosi set a Tuesday deadline for more progress with the White House on a fiscal stimulus deal before the Nov. 3 election, while President Donald Trump renewed his offer to go beyond the dollar amounts now on the table.

OPEC and its allies are under growing pressure to back down on a planned easing of output curbs, due to take effect in January, with oil stuck at around $40 and more supply coming online from Libya. President Vladimir Putin and Saudi Arabia Crown Prince Mohammed Bin Salman have spoken twice by phone in a week -- the first time the countries’ leaders have done that since the depths of the oil crisis in April, when they were hashing out a deal to cut supply and bring the price war to an end.

OPEC+ forecast global oil stockpiles could increase by 200,000 barrels a day next year if Libya manages to revive supply and the pandemic hits demand harder than expected, according to a document seen by Bloomberg. OPEC’s Joint Ministerial Monitoring Committee is due to meet online on Monday to discuss the state of the market ahead of larger ministerial meetings on Nov. 30-Dec. 1, which will finalize next year’s production quotas.

Drilling rigs targeting crude oil in the U.S. rose by 12 to 205 last week, Baker Hughes reported, in another sign of production picking up.