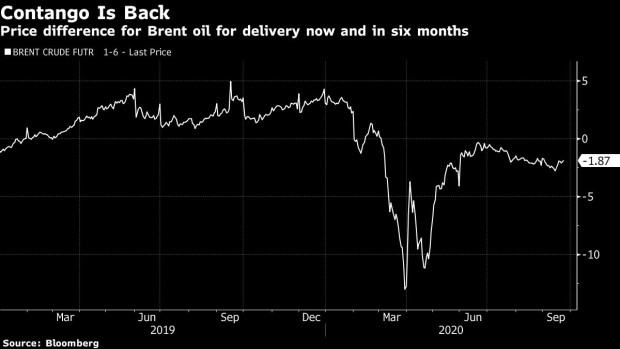 Rail wagons for oil, fuel and liquefied gas cargo stand in sidings at Yanichkino railway station, cose to the Gazprom Neft PJSC Moscow refinery in Moscow, Russia, on Monday, April 27, 2020. Oil prices plunged to within a whisker of $10 a barrel after a major index tracked by billions of dollars in funds bailed out of near-term contracts for fear prices may turn negative again. , Bloomberg

Oil stockpiles have been building in September and won’t draw down enough in the remainder of the year to be in balance if the cartel follows through with its plan to taper production cuts early next year, Marco Dunand, Mercuria’s co-founder and Chief Executive said in an interview.

“We do not need the extra oil,” Dunand said from the firm’s headquarters in Geneva.

The forecast, by one of the world’s biggest independent oil traders, is ominous for Saudi Arabia, Russia and the rest of OPEC+ who have made historic output cuts this year in an effort to save a market battered by the coronavirus pandemic. With the cartel due to discuss easing some of those curbs from January 2021, the warning that stockpiles have been building again could force OPEC+ to reconsider.

“We see a fair amount of oil going into ships, into floating storage, now,” he said. “We are filling up both tankers as floating storage and onshore tanks in September,” he said. There has been a slow-down in the global rebalancing process.”

Global oil inventories built at an unprecedented rate between March and May due to the combination of the coronavirus pandemic’s impact on energy demand and the price war between Saudi Arabia and Russia, which saw the kingdom flooding the market with crude. Since then, inventories have been drawing down after U.S. President Donald Trump brokered a deal between Riyadh and Moscow to cut output from May.

The current oversupply is partly the fault of OPEC+, which began to taper its production cuts in August and added more than 1 million barrels a day into a weak market, Dunand said. The group is scheduled to meet December 1 to decide whether to add a further 2 million barrels a day from January 2021.

“I don’t think the market can take that extra oil,” he said.

Dunand’s slightly bearish view, though not as extreme as Trafigura Group, the world’s second-largest indedpendent oil trading house is at odds with Vitol Group, the top independent energy trader, which expects global oil stockpiles to shrink rapidly by year-end.

Even as China recovers, the U.S. and Europe remain weak as governments strive to achieve a delicate balance of re-starting their economies and keeping a lid on the virus. As a consequence demand is much lower than what the market was previously expecting to see by now, Dunand said.

“China is showing robust demand and Indian demand is starting to improve. But elsewhere consumption is weak, and now countries are going back into lockdown,” he said.

“Demand is poor and on the supply side refiners are pushing jet fuel into the diesel pool. The result is that diesel inventories keep growing,” he said. “Diesel is the biggest problem in the oil market, by a long shot.”