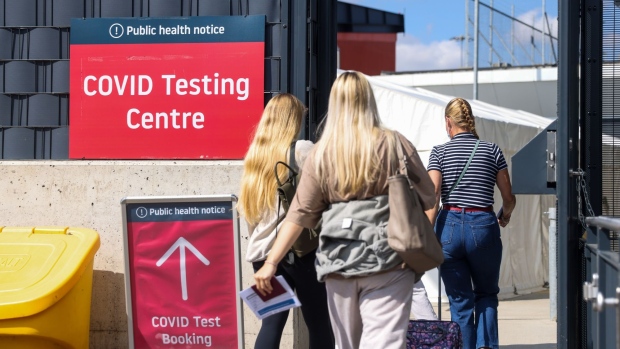 Members of the public queue for Covid-19 booster vaccinations at St Thomas hospital, near the Houses of Parliament, in London, U.K., on Thursday, Dec. 16, 2021. The City of London has transformed from a raucous district with thousands of workers celebrating Christmas into a no-party zone in the space of a week. , Bloomberg

(Bloomberg) -- U.K. health authorities said they’re investigating a version of the omicron variant based on an increase in the number of cases, but that it’s too early to evaluate its importance or severity.

“It is the nature of viruses to evolve and mutate, so it’s to be expected that we will continue to see new variants emerge as the pandemic goes on,” Meera Chand, Covid-19 incident director at the U.K. Health Security Agency, wrote in a statement on Friday. “Our continued genomic surveillance allows us to detect them and assess whether they are significant.”

The data on the omicron subvariant, known as BA.2, are limited, and the numbers of cases are low, according to the agency. There’s insufficient evidence to determine whether it causes more severe illness and it’s not possible to determine where it originated. The agency said 426 cases have been confirmed in England, with the earliest dated Dec. 6.

The U.K. is currently designating it as a “variant under investigation,” rather than one of concern.

Omicron has spread rapidly around the world but appears less likely to cause hospitalizations and deaths than predecessors such as delta. While that’s raising hopes of a turning point in some countries two years into the pandemic, health experts warn emerging variants continue to pose a risk and that the global crisis isn’t over.