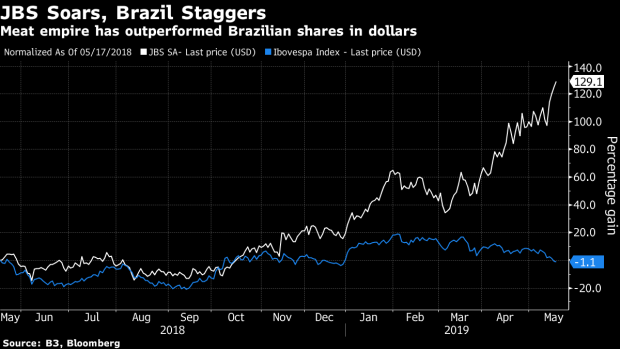 Michel Temer, president of Brazil, listens during a Bloomberg Television interview in New York, U.S., on Monday, Sept. 19, 2016. Temer expects significant budget savings only after 2020 from a pension reform proposal he intends to present to Congress before year-end, the country's pension secretary said in an interview. Photographer: Christopher Goodney/Bloomberg , Bloomberg

It’s a designation harking back to the leaked audios of a late-night talk between then-President Michel Temer and Joesley Batista, one of two brothers who control JBS SA, one of the nation’s biggest companies. Now, two years after Joesley and Wesley Batista provided alleged evidence against Temer and admitted to bribing hundreds of politicians, Brazil is still recovering from a scandal that undermined efforts to overhaul the nation’s pension system and restore its recession-hit economy.

The company, though, is stronger than ever.

JBS shares have more than doubled this year to an all-time high. That’s boosted the brothers’ collective interest in the world’s biggest meat producer to more than $6.3 billion, up about 60% from the days before the scandal. The brothers now have a personal worth of about $2.9 billion each, according to the Bloomberg Billionaires Index. The family’s holding company, J&F Investimentos SA, says the figure is an overestimate.

The company’s climb comes on the heels of a deadly pig disease in China that could expand JBS’s global influence for years to come, after a decade-long, $20 billion acquisition spree led by the Batista brothers broadly diversified its footprint.

"JBS has never been in such a solid condition," Chief Executive Officer Gilberto Tomazoni said this week in a signal the Sao Paulo-based company is ready to resume expansion after slashing debt and extending maturities.

Under Tomazoni, named CEO in December 2018, JBS has also revived a 2016 plan to sell shares in the U.S., a move that then-CEO Wesley Batista lauded as key to unlocking cheaper financing for the powerhouse and equity value to shareholders.

Of course, Joesley and Wesley Batista have also had their share of headwinds. They’ve spent six months in jail, and were forced out of day-to-day operations in the company founded in 1953 by their father. Also, the family’s holding company, J&F, agreed in 2017 to pay 10.3 billion reais ($2.6 billion) as part of a leniency agreement to protect JBS and other companies from charges.

Brazil’s Supreme Court may revoke the Batista plea agreement after prosecutors alleged the brothers concealed information during negotiations with authorities. If the deal is terminated, the leniency agreement may also be ended, prosecutors said earlier this month, though a Supreme Court Judge said in December said that the two agreements are not necessarily tied together.

In March, Joesley Batista was charged with fraud and corruption by prosecutors as part of an investigation into transactions between JBS and Brazil development bank BNDES. Wesley has become a defendant in an insider-trading investigation. No deal has yet been reached with the U.S. Department of Justice to avoid prosecution under U.S. anti-bribery laws.

The day after the news on the tape and the brothers’ plea bargain broke, Brazil’s stock market posted its biggest slide since the 2008 crisis, with a circuit breaker suspending trades for 30 minutes in an early session.

At an event earlier this month in Sao Paulo, Ney Miyamoto, a partner at Alaska Investimentos Ltd, recalled the events as the scandal became public.

"Nobody slept that night," Miyamoto recounted. The next day, Luiz Alves Paes de Barros, the fund’s billionaire owner, sensed the tense atmosphere while walking along traders’ desks, according to Miyamoto. De Barros, he said, kept repeating the same question as he walked: "How many times did you throw up today?"

To some extent, Latin America’s largest nation is still trying to recover from the scandal. Now, like then, a pension reform plan seen as crucial to tackle a budget deficit is slowly creeping its way through Congress under the new administration of Jair Bolsonaro, a path that’s proving much tougher to cross now. Already, modest growth estimates are being revised down

Temer spent the rest of his term fighting off corruption accusations, sidetracking pension reform. He avoided impeachment in 2017 after Joesley Batista provided prosecutors with evidence that he allegedly endorsed payments of hush money to a jailed former lawmaker, but investigations have continued. The former president briefly went to prison in March, and again this month, amid an investigation derived from the so-called Carwash corruption probe, the largest in the country’s history.

J&F, the family holding company, decided to take responsibility for its mistakes and build a rigid compliance structure so these type of things never happen again, the company said in an emailed statement. They’ve conducted seven internal investigations under prosecutors’ watch and trained over 100,000 workers on corruption prevention, the statement said.

"We believe in Justice and judicial security," J&F said.

--With assistance from Blake Schmidt and Ben Stupples.