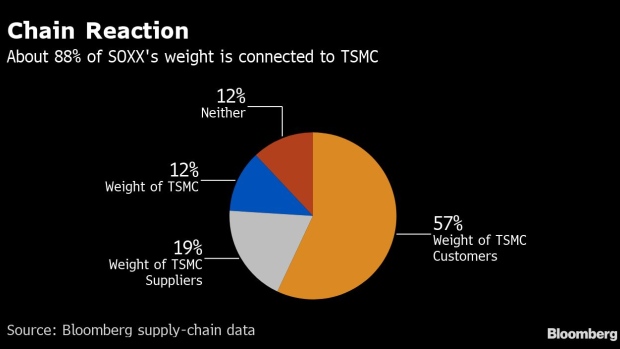 Exchange-traded fund investors have a lot riding on earnings from Taiwan Semiconductor Manufacturing Co. this Thursday.

Most major semiconductor companies don’t make the chips themselves. Instead, they will design them and outsource production to another company, like TSMC. TSMC is the world’s largest contract manufacturer of chips.

TSMC “is unequivocally critical to the industry” and its earnings forecast will be closely watched by investors, said Bloomberg Intelligence analyst Anand Srinivasan. “Guidance is critical and color for the second half -- especially for smartphone chips -- may set the tone for how chip vendors are planning supply in anticipation of demand.”

Performance of semiconductor stocks has been highly volatile so far in 2019, with swings of more than 10 per cent up or down in four of the past six months, much more volatile than the S&P 500, according to Bloomberg Intelligence. After a wave of optimism that drove stocks to record highs this spring, investors have been growing increasingly skeptical that demand, pricing and inventory levels will improve in the second half of this year.