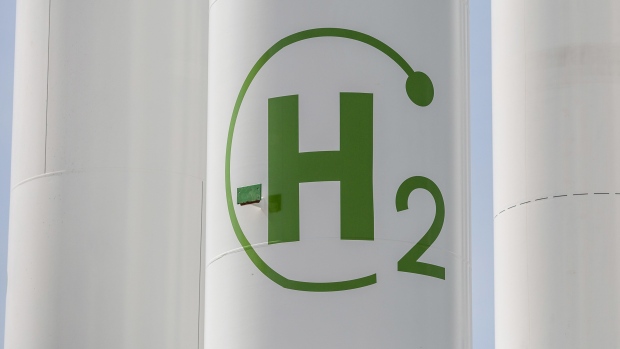 The chemical symbol for hydrogen on a storage tank during the final stages of construction at Iberdola SA's Puertollano green hydrogen plant in Puertollano, Spain, on Thursday, May 19, 2022. The new plant will be Europe's largest production site for green hydrogen for industrial use. Photographer: Angel Garcia/Bloomberg , Bloomberg

(Bloomberg) -- Korea Gas Corp., one of the world’s biggest liquefied natural gas importers, expects to win benefits from its current business as it shifts to a future focused on hydrogen.

“We’ll completely transform our LNG-driven operations into hydrogen by 2050 in line with South Korea’s carbon neutrality target,” Lee Jae Hoon, a general manager of the company’s hydrogen business development team, said in an interview. “We have advantages over utilizing our existing gas infrastructure, technology and experience.”

The state-run gas distributor, known as Kogas, expects to begin green hydrogen imports from 2027, and intends to invest in production of the zero-emissions fuel in places including Australia and the Middle East, just as it currently does with LNG.

Kogas is joining a raft of global energy giants in pushing the case for hydrogen, and BP Plc confirmed this week it would press ahead on projects with two of the UAE’s biggest energy firms.

While the gas is billed as potentially key to curbing emissions from carbon-heavy industrial processes like steelmaking, the market is still in its infancy. There’s also been debate over plans from existing energy suppliers to use fossil fuels and carbon capture to produce hydrogen, rather than processes that require only renewable electricity and water.

By 2026, Kogas plans to complete demonstration projects to blend 20% of hydrogen into the existing gas pipeline across South Korea and would aim to keep increasing the proportion, Lee said on the sidelines of the 2022 World Gas Conference in Daegu.

Though Kogas is planning for some production of green hydrogen -- made using zero-emissions electricity -- domestically, the nation is constrained by a lack of available land for solar and wind projects.

The importer is in discussions with local shipbuilders to develop liquid hydrogen vessels and also working on technologies for storage tanks, according to Lee.

“South Korea and Japan are likely to heavily depend on hydrogen imports,” he said. “That’s why it’s critical for us to step up our game to be a leader in the industry.”